World-leading radar to be developed for RAF Typhoons

DE&S has helped negotiate the release of £317 million in funding to continue the development of a new world-leading radar for RAF Typhoons.

The continued development will see BAE Systems and Leonardo carry out the work, securing more than 600 highly-skilled jobs across the UK, including more than 300 at Leonardo’s Edinburgh site.

This maintains a highly-specialized, world-leading industry base that will ensure the UK remains at the forefront of radar technology development, which is essential for the Future Combat Air System (FCAS).

“This continued development is the culmination of years of collaborative work with industry to deliver cutting edge radar capability to the RAF.  It will sustain hundreds of highly-skilled jobs across UK industry and is central to the UK’s future combat air strategy” 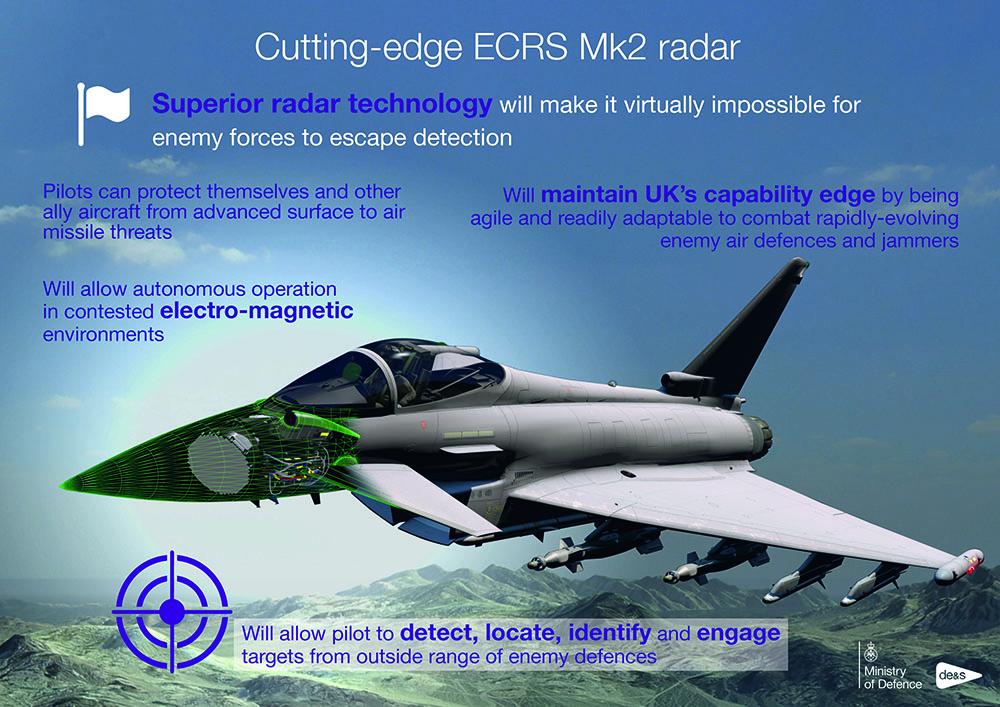 The advanced sensor technologies of the AESA equipped ECRS Mk2 will not only ensure UK Typhoon maintains a capability edge in the increasingly contested battlespace it will face in future years, but they are also central to the longer term and FCAS.

Air Vice Marshall Keith Bethell, Director Combat Air at DE&S, said: “I am delighted with the announcement of the contract for the development of the next generation radar capability for Typhoon.

“It is a product of persistent hard work from the Typhoon Enterprise in the UK, working with our colleagues in the European Partner Nations, to cement the agreements to progress the development of the ECRS Mk2 design through to a prototype radar.

“This project has strong ties to the Combat Air Strategy and promises to deliver a formidable leading-edge capability, whether it be for the continued evolution of Typhoon as a world-class combat air platform or in years to come as part of Future Combat Aircraft System.

“It comes at an important time for UK industry, retaining a sovereign workforce of hundreds, building further expertise and technological innovation, with much promise for the future.” 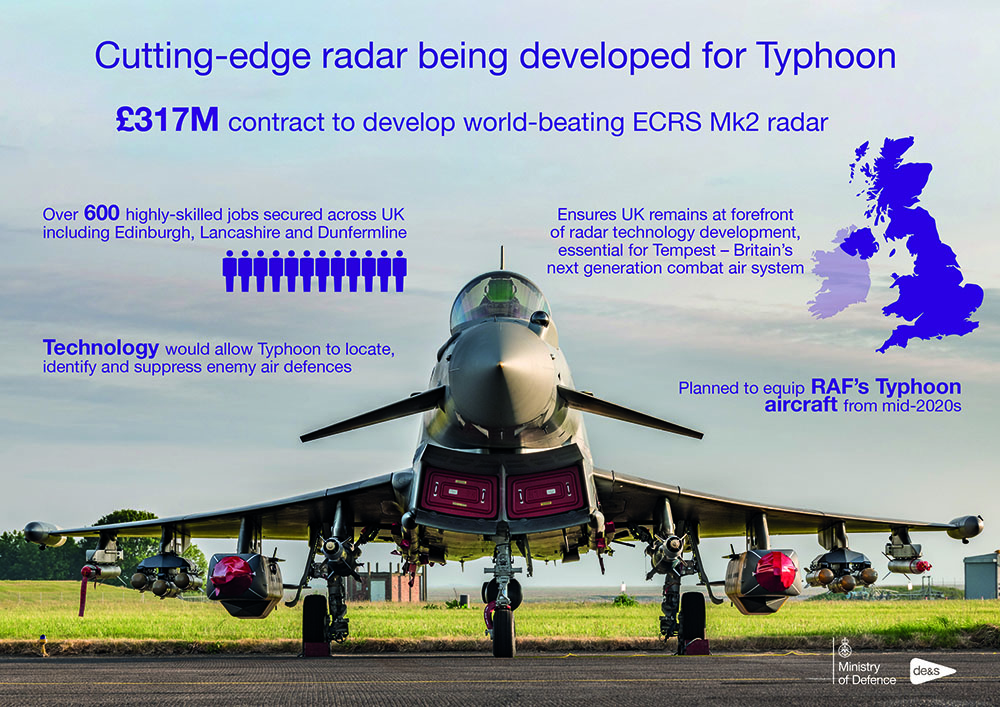 In addition to the jobs at Leonardo’s Edinburgh’s site, there are a further 100 at Leonardo’s Luton site, 120 at BAE Systems’ site in Lancashire, 100 at BAE’s site in Dunfermline, Fife and 50 at sub-contractor Meggitt in Stevenage.

Leonardo are leading the development of the new radar, designed to meet the specific needs of the RAF, and BAE Systems will deliver its integration onto Typhoon aircraft.

DE&S CEO Sir Simon Bollom said: “This continued development is the culmination of years of collaborative work with industry to deliver cutting edge radar capability to the RAF.  It will sustain hundreds of highly-skilled jobs across UK industry and is central to the UK’s future combat air strategy.”

Currently, Typhoon is fitted with a mechanically-scanning radar, but in future it is planned to upgrade Typhoons to the new ECRS Mk2 hardware.

The technology provides access to advanced modes, including the ability to simultaneously detect, identify and track multiple targets in the air and on the ground in the most challenging environments.

This, along with ECRS Mk2’s electronic warfare capability, would ensure the RAF can protect UK land and maritime forces and deliver UK air power wherever it is needed in the world.

In addition, the introduction of a ground-breaking Multi-Function Array would ensure Typhoon’s continued viability and competitiveness in the export market.

The UK’s programme is being developed in parallel to similar commitments from Germany and Spain to deliver their own national requirements for an E-Scan radar.

It is planned to equip the RAF Typhoon aircraft from the mid-2020s.

Find out more about our support for the RAF Typhoon.