Hear from Chris, an Engineering Advanced Apprentice, about how our apprenticeship scheme allowed him to change careers, and build his job around his family life with flexible working

After 10 years in the pub industry, including being a general manager for several well-known chains, it was time for a change for Chris Wiggett.

Now the father-of-two is in the final year of his Engineering Advanced Apprenticeship, he’s enjoying the freedom to strike a balance between work life and family life.

“I was running quite a busy town centre pub and a management team of about seven. It’s dealing with stress, prioritising workflow management, working with finances – a lot of quite transferable skills into what we do at DE&S.”

“Flexible working for me, as a family man with two young kids and a wife who works, has been great”

Chris has experienced land vehicles, submarines and weapons integration for the Eurofighter Typhoon in his placements thus far.

“There’s just so much opportunity out there,” he added. “If you want to do something you can quite easily get into that field and the guys there will show you everything you need to know, and you can just go and do it.”

As well as the variety and opportunity, there are plenty of other benefits of being a DE&S apprentice.

Chris added: “Flexible working for me, as a family man with two young kids and a wife who works, has been great. Along with pension benefits and everything, the benefits package is quite good.”

Even though he is still an apprentice, Chris has already been given responsibility and the opportunity to prove himself. He has received a commendation and got distinctions across the board for his assessments.

“In my very first placement I got it stuck in with both feet,” he said. “Then they gave me some quite big projects to just kind of run with myself and I feel like, over those three or four months, I made things happen.

“I wasn’t just there as an apprentice watching and learning, I got stuck in and made a difference for their workload and it was a proud moment for me.

“So, if you want to progress, there’s lots of training courses and material available to help you develop, position your career and move forward.” 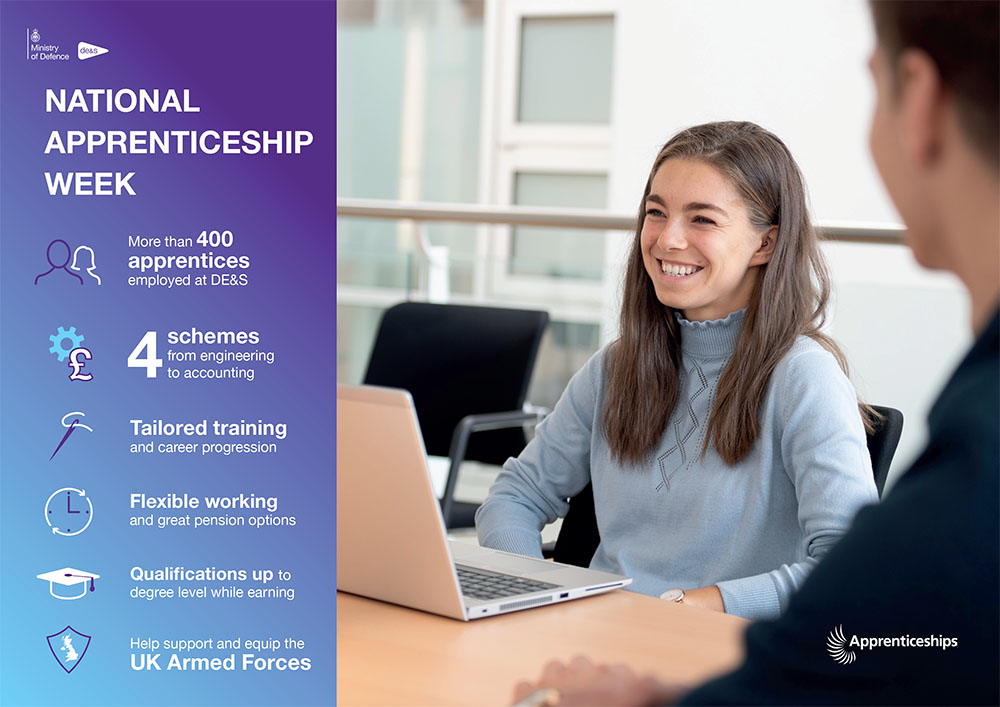