Diesel engines are key to providing either electrical or propulsion power to the ships in which they are fitted.

A £5.5-million contract to provide support for small diesel engines onboard critical Royal Navy vessels, including amphibious assault ships and mine hunters, has been placed by the Ministry of Defence (MOD).

Under the terms of the contract, Royston Diesel Power in Newcastle will be responsible for providing diesel engine spares and technical support as well as repairing and refurbishing the engines where required.

The award of the contract will sustain highly-skilled jobs within the marine industry in the north-east of England, as well as providing work to those enrolled in the company’s sponsored engineering apprenticeship scheme.

Small diesel engines are fitted alongside larger engines to vessels throughout the Royal Navy and Royal Fleet Auxiliary (RFA) including Type 23 frigates, single role mine hunters, Albion-class amphibious assault ships and Bay-class RFA, and are the main engines to vessels like the Hunt-class minesweepers.

“This was an excellent example of DE&S and industry working together to provide a value-for-money support contract for small diesel engines within the Royal Navy fleet.” 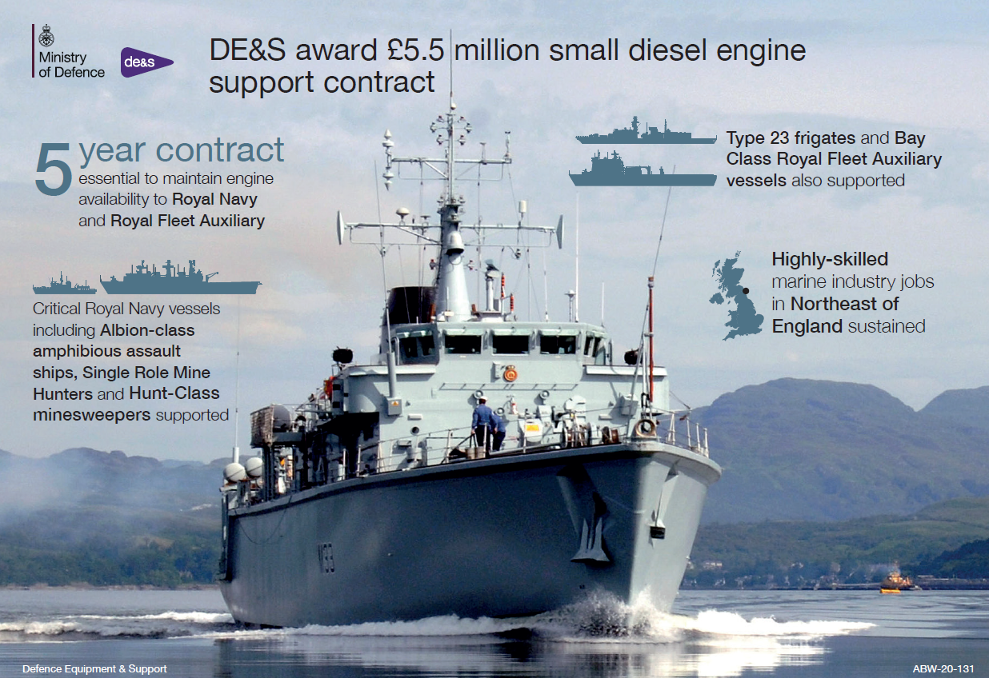 Diesel engines are key to providing either electrical or propulsion power to the ships to which they are fitted. An effective support contract is essential to maintain engine availability to the Navy and RFA.

The five-year contract was negotiated by the Marine Diesel Group within Defence Equipment and Support (DE&S), the procurement arm of the MOD.

Team leader, Commander Richard McHugh, said: “This was an excellent example of DE&S and industry working together to provide a value-for-money support contract for small diesel engines within the Royal Navy fleet.”