A £180 million contract awarded to Thales UK will protect hundreds of Scottish jobs over the next 10 years, suppling Remote Weapons Stations (RWS) to the British Army’s new Boxer vehicles.

RWS notifies soldiers of enemy threats via a digital display from the safety of inside the Boxer vehicle – providing extra protection for troops deciding to evade or engage the target. The system also offers advanced situational awareness through 360 degrees long range observation cameras to identify and defeat threats while moving at speed.

“This is another significant step forward for Boxer and I am delighted to see the different threads of the programme coming together. This is a military capability of the future to be proud of”

Defence last year secured a substantial settlement of more than £24 billion over four years to modernise the Armed Forces to meet the threats of the future and support British across the Union.

DE&S Director Land Equipment, Major General Darren Crook said: “This is another significant step forward for Boxer and I am delighted to see the different threads of the programme coming together. This is a military capability of the future to be proud of.”

Following the sonar contract for Dreadnought submarines last year, this is Thales UK’s second multi-million-pound contract within 12 months, further showcasing the government’s commitment to levelling-up across the UK.

Minister for Scotland, Iain Stewart said: “We look forward to working with Thales UK on the delivery of these Remote Weapons Stations, knowing this contract will not only contribute to the safety of British military personnel on the front line, but also support industry growth here in Scotland.

“Protecting hundreds of jobs and supporting 30 apprenticeships, this £180 million UK Government investment further demonstrates our commitment to supporting the defence sector in Scotland and underscores the many opportunities available within the United Kingdom economy.”

Minister of State for Defence, Baroness Goldie said: “This £180m contract with Thales UK will deliver pioneering surveillance and protection for our front line soldiers and our new Boxer fleet. We depend on skills and technology from across the United Kingdom and this order will secure 700 Scottish jobs.

“Our troops face a myriad of new and emerging threats so it is imperative we invest in critical detect and destroy technology such as this.”

The UK re-joined the Boxer programme in 2018 and has committed £2.8 billion to deliver over 500 vehicles to the British Army. The first vehicles are scheduled to be ready for service in 2023.

The contract was awarded to Thales by Rheinmetall BAE Systems Land (RBSL) and Rheinmetall Landsysteme.

Managing Director of Thales Vehicle Tactical Systems and Optronics and Missile Electronics UK, Steven Lockley said: “Thales’ sub-contract is a great step forward after months of hard work.  Working with our strategic partners, Thales is bringing new skills and technologies into the programme, our facilities in Scotland and the UK supply chain.” 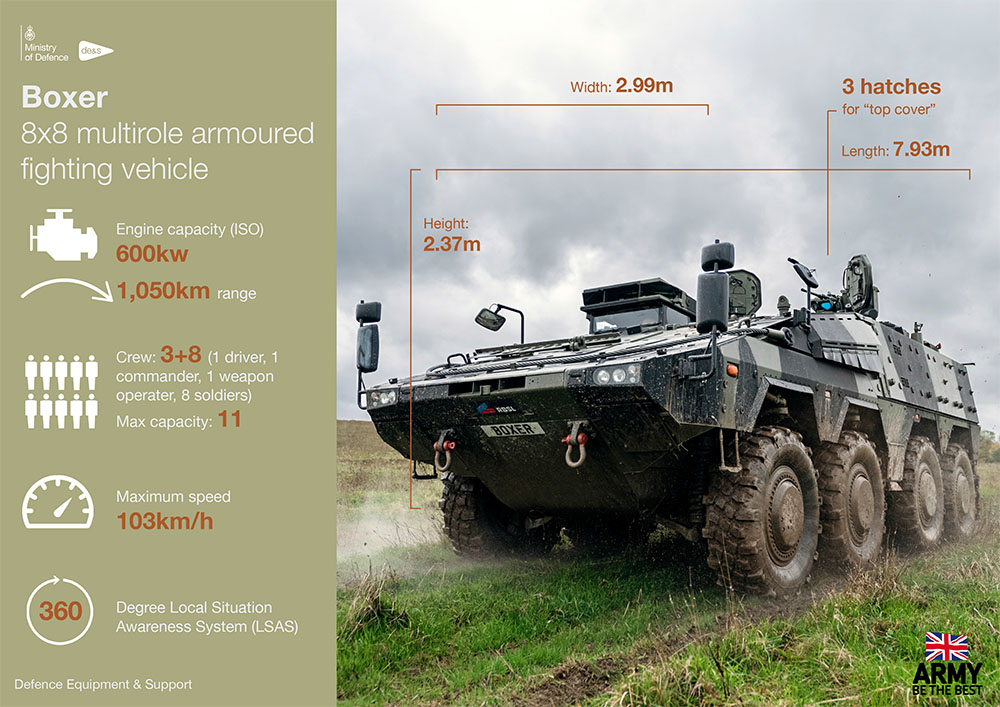