A team from DE&S showcase body armour and helmets to children at the London Science Museum to talk about the science and engineering behind the life-saving protection.

DE&S employees have been engaging with thousands of schoolchildren in support of the London Science Museum’s ‘We are Engineers Family Festival’.

Encouraging the children to “Suit-Up” the team of five attended three days of a week-long event to showcase body armour and helmets, and talk about the science and engineering behind the life-saving protection.

With the museum drawing in around 15,000 visitors per day, the event provided a huge opportunity to reach out to the next generation of innovators and problem solvers and talk about the work that DE&S does to support the Armed Forces.

Dr Eluned Lewis, DE&S Senior Fellow in Personal Ballistic Protection and the Deputy Technical Discipline Lead for Science in the Engineering Function, spotted the call out for volunteers from the museum and felt it was an excellent opportunity to “give something back”.

She joined hundreds of engineers who applied to lead activities and was pleased to hear her idea was one of the ones chosen as an “exciting engineering activity”.

“I wanted to inspire the next generation of engineers and scientists into STEM and Defence-related careers,” she said.

“I realised there was a huge opportunity here to reach out to thousands of visitors and to be an ambassador for the DE&S, talking about the great work that we do to deliver equipment to the Armed Forces.” 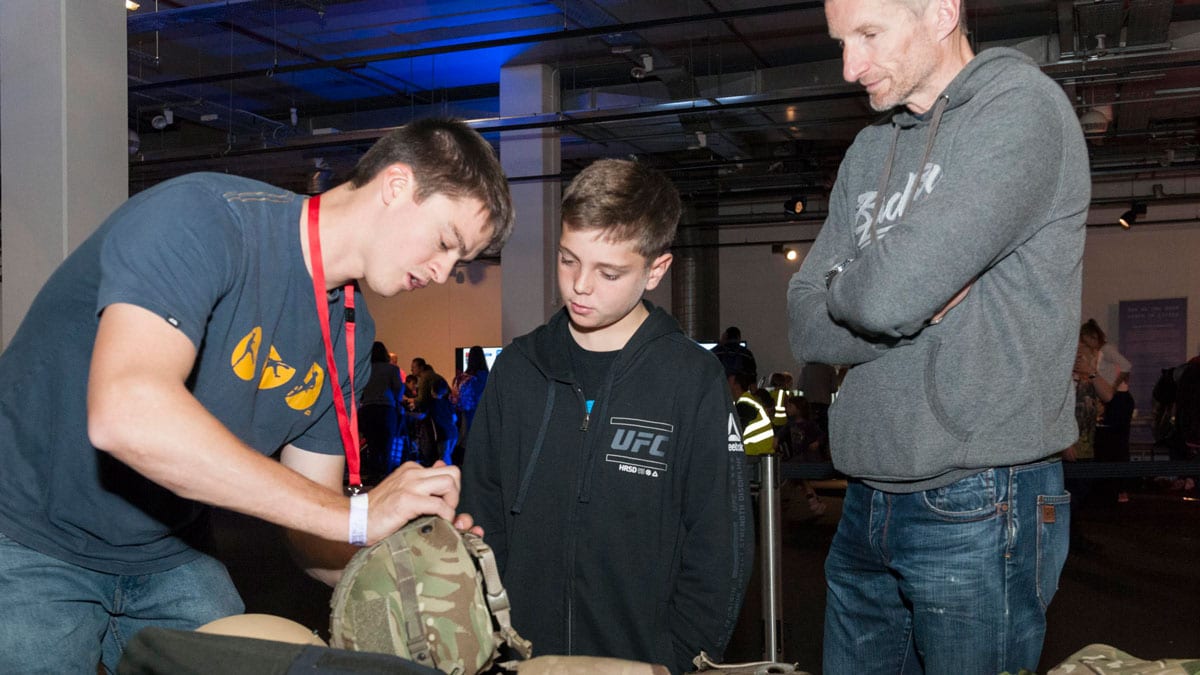 A DE&S employee talks through the essential safety aspects of an army helmet at the London Science Museum.

The Science Museum was hosting the family festival and other activities for schools in support of the Year of Engineering campaign and wanted to showcase unusual and exciting fields within engineering.

Other activities on show included trying your hand at welding edible chocolate creations, controlling your friend’s muscles using electric currents and racing to the top thanks to the power of gears.

The event also provided an opportunity for the team – which included James Davis from the Technology Office and Barbara Clarke, Greg Stafford and Callum Partridge from the Soldier, Training and Special Projects Team – to talk and share their stories of engineering to show that it can be a career for everyone.

Dr Lewis said: “Working with body armour is an unusual and exciting career and I am passionate about STEM engagement. Having been involved in Families Days at MOD Abbey Wood, there has always been huge interest from children, and parents alike, about body armour and helmets, trying it all on and taking pictures of themselves wearing it.

“This was an opportunity to take the MOD Abbey Wood Families Day ‘on the road’ and it went down really well. The children were really excited and loved finding out about how and why military body armour has changed over the years and also loved trying it all on.”

Barbara said that she enjoyed speaking to the children (and adults alike) about textiles science and the fabrics used in body armour. There was really a lot of interest in how we are using high performing textiles to reduce the weight of body armour and increase its performance. Our day-to-day jobs are exciting and it was great to see the reaction from the public of how we are protecting our Armed Forces.

Callum, a reservist with the Royal Engineers said that it was great to meet people who were genuinely impressed with the work that we do. One gentleman said he didn’t realise how much ‘behind the scenes work’ went into developing armour for the Armed Forces. It made me really proud to be a part of it.

James, also a reservist with the Royal Engineers, said that it was a fantastic opportunity to explain to children and their parents about the work that goes into equipment used by the armed forces, and the breadth of careers available to engineers of the future.

Find out about Engineering at DE&S