As with every year, June 1st marks the start of LGBT+ Pride Month. Find out more about Pride and what we are planning to do to celebrate it

Pride is a celebration of equality and visibility of the LGBT+ community. It is also a reminder and a protest of all the injustice and inequality that still occurs across the world. People like to ask, “why do you need a gay pride?” or “if you can have gay pride, why isn’t there a straight pride?” These are the kinds of questions that we hope to answer in this paper.

June was chosen as Pride Month to commemorate the Stonewall Riots which occurred at the end of June in 1969.

The Stonewall Riots were a series of spontaneous, violent demonstrations by members of the LGBT+ community against a police raid of the Stonewall Inn. “Though the Stonewall uprising didn’t start the gay rights movement, it was a galvanizing force for LGBT political activism, leading to numerous gay rights organizations.” (History.com Editors, 2017)

“On the one-year anniversary of the riots on June 28, 1970, thousands of people marched in the streets of Manhattan from the Stonewall Inn to Central Park in what was then called “Christopher Street Liberation Day,” America’s first gay pride parade. The parade’s official chant was: “Say it loud, gay is proud.”” (History.com Editors, 2017) 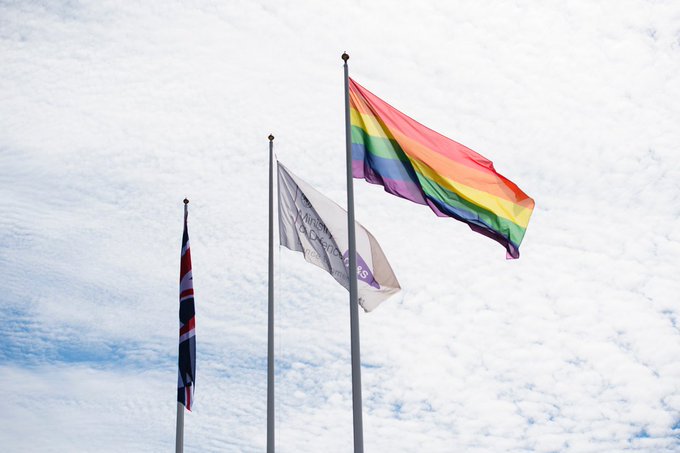 Following the shooting of Harvey Milk, the demand for the rainbow flag increased to the point where Paramount Flag Company began selling a stock rainbow flag which didn’t include the pink stripe; Gilbert Baker also dropped the pink stripe on his flags due to the shortage of pink fabric.

In 1979, the turquoise stripe was dropped in order to give the flag an even number of stipes so that it could be easily split in half to decorate parade routes.

In 2017, Baker revealed a 9-stripe flag following the election of President Trump. This 9th stripe was lavender, it sat above the pink stripe and represented diversity. Other designs of the pride flag include:

Of course on top of these, there are many other flag types representing the many different aspects of the LGBT+ spectrum, including, but not limited to, the Trans, Bi, & Lesbian Flags. ​

​As we are unable to host any sort of event to celebrate Pride this year, our Pride Network has decided to write testimonies answering the question “What does Pride mean to you?”. These will be shared across our comms channels throughout the month to raise awareness and promote diversity and inclusion amongst our staff.