The new submarine-hunting Poseidon Maritime Patrol Aircraft (MPA) has touched down in the UK for the first time.

Aircraft ZP801 – known as the Pride of Moray – is the first of a new £3 billion programme including the purchase of nine state-of-the-art jets which will improve the UK’s ability to track hostile targets below and above the waves.

They will protect the UK’s continuous at-sea nuclear deterrent and be central to NATO missions across the North Atlantic; co-operating closely with the US and Norwegian Poseidon fleets. 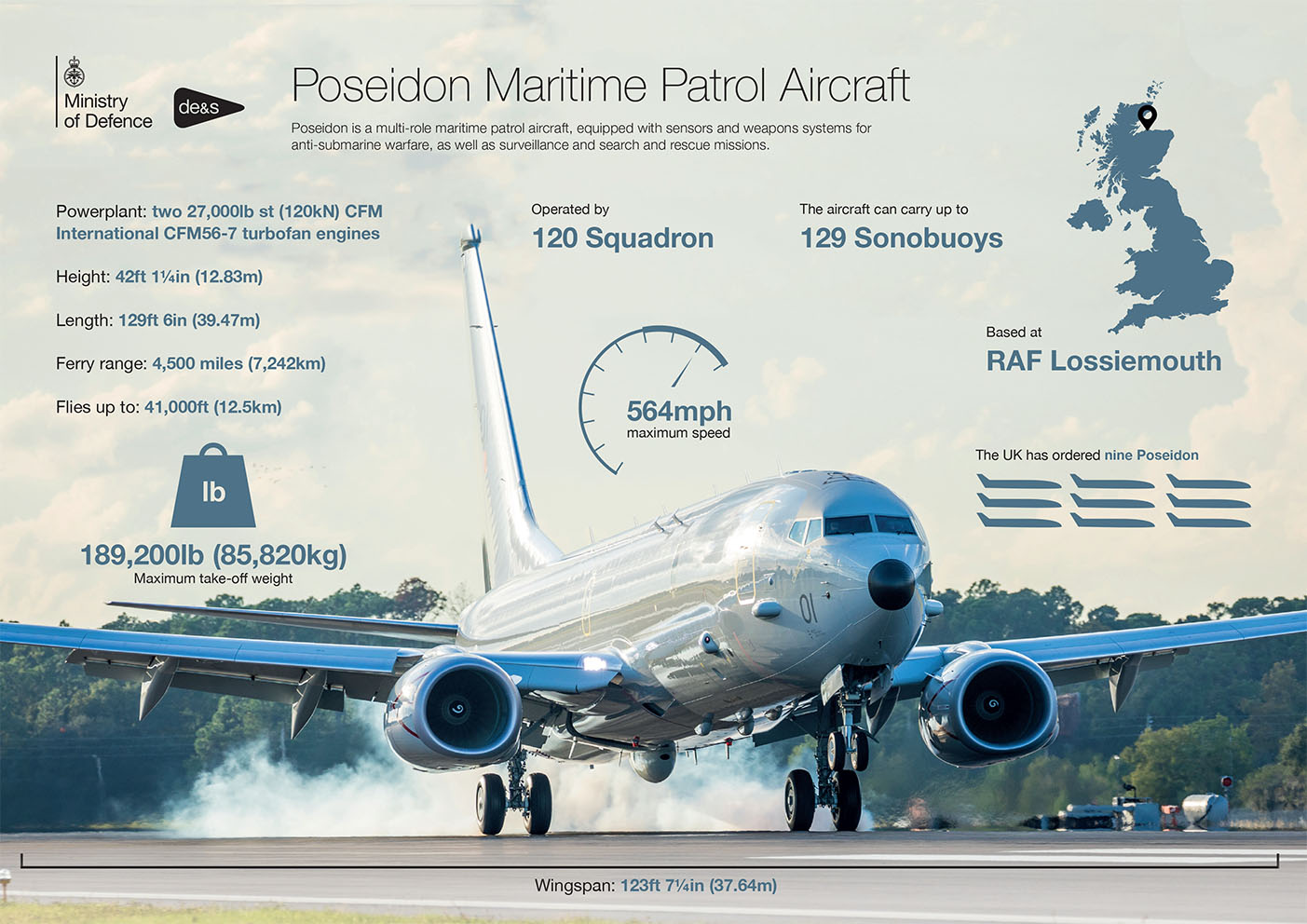 From main gate approval in mid-2016 it took the DE&S procurement less than 3.5 years to get to the exciting point last October when the first Boeing-developed Poseidon was handed over to the RAF in Jacksonville, Florida.

Director Air Support, Richard Murray, said: “We are extremely proud to celebrate the arrival of the first Poseidon aircraft, the Pride of Moray, at Kinloss today.

“This momentous event is testament to the P-8 team’s determination, hard work and dedication over the past four years; working in close collaboration with colleagues from the RAF, the US Navy and industry to ensure delivery of the UK’s maritime patrol capability.”

Poseidon is designed to carry out extended surveillance missions at high and low altitudes and is equipped with cutting-edge sensors which use high-resolution area mapping to find both submarines and surface vessels.

Each aircraft carries sonobuoys, which are dropped into the sea to search for enemy submarines, survey the battlespace under the sea and relay data back to the aircraft.

Poseidon is also planned to be armed with Harpoon anti-surface ship missiles and Mk54 torpedoes capable of attacking both surface and sub-surface targets.

Each aircraft carries sonobuoys, which are dropped into the sea to search for enemy submarines, survey the battlespace under the sea and relay data back to the aircraft.

Poseidon will also be armed with Harpoon anti-surface ship missiles and Mk 54 torpedoes capable of attacking both surface and sub-surface targets.

The fleet’s eventual home will be RAF Lossiemouth, where £470 million worth of work is going on including the build of a new £132 million strategic facility, upgraded runways and a new air traffic control tower.

Members of DE&S’ P-8 Poseidon project team were there to see her land, including Team Leader, Michelle Sanders: “Seeing the first RAF Poseidon MRA Mk1 landing in the UK is an incredibly proud moment for all of the team at DE&S,” she said.

“There was a lot of excitement accepting our first P-8 Poseidon aircraft back in October last year. There’s even more excitement now she has come home.”

All nine Poseidons will be delivered to the RAF by the end of 2021 and achieve full operational capability from RAF Lossiemouth in 2024.

Poseidon will temporarily operate from Kinloss until October 2020 while £75m of planned runway and taxiway resurfacing works is completed at Lossiemouth by the Defence Infrastructure Organisation.