The three directed energy weapons projects were announced by Minister for Defence Procurement, Jeremy Quin, at DSEI in London

Three contracts worth around £72.5 million have been awarded to UK industry to produce advanced laser and radio frequency demonstrators as part of the Novel Weapons Programme (NWP).

Known collectively as Directed Energy Weapons (DEW), these next-generation technologies could revolutionise the battlefield and reduce the risk of collateral damage. The systems are powered by electricity and operate without ammunition, significantly reducing operating costs, increasing platform endurance and providing unprecedented offensive and defensive flexibility to personnel on the frontline.

Negotiated by DE&S and awarded to consortia headed by Thales and Raytheon UK, the four-year contracts will create at least 49 new jobs and sustain 249 jobs.

The first laser will undergo user experimentation onboard a Royal Navy Type 23 frigate by detecting, tracking, engaging and countering Unmanned Aerial Vehicles (UAV), while the British Army’s Wolfhound armoured vehicle will host a laser demonstrator that will investigate capability against UAV and other air threats.

The radio frequency demonstrator will also be used by the British Army, hosted on a MAN SV truck to detect and track a variety of air, land and sea targets.

“Directed Energy Weapons are a key element of our future equipment programmes and we intend to become a world-leader in the research, manufacture and implementation of this next-generation technology”

Minister for Defence Procurement, Jeremy Quin, said: “We are investing £6.6 billion in research and development across Defence over the next four years, reaffirming our commitment to provide the Armed Forces with truly advanced capabilities.

“Directed Energy Weapons are a key element of our future equipment programmes and we intend to become a world-leader in the research, manufacture and implementation of this next-generation technology.”

Marking a significant step towards the use of high-powered laser and radio frequency weapons across Defence, the investment reaffirms commitments outlined in the Defence Command Paper ensuring UK Armed Forces are equipped with the best possible equipment ready to deal with new and emerging threats. 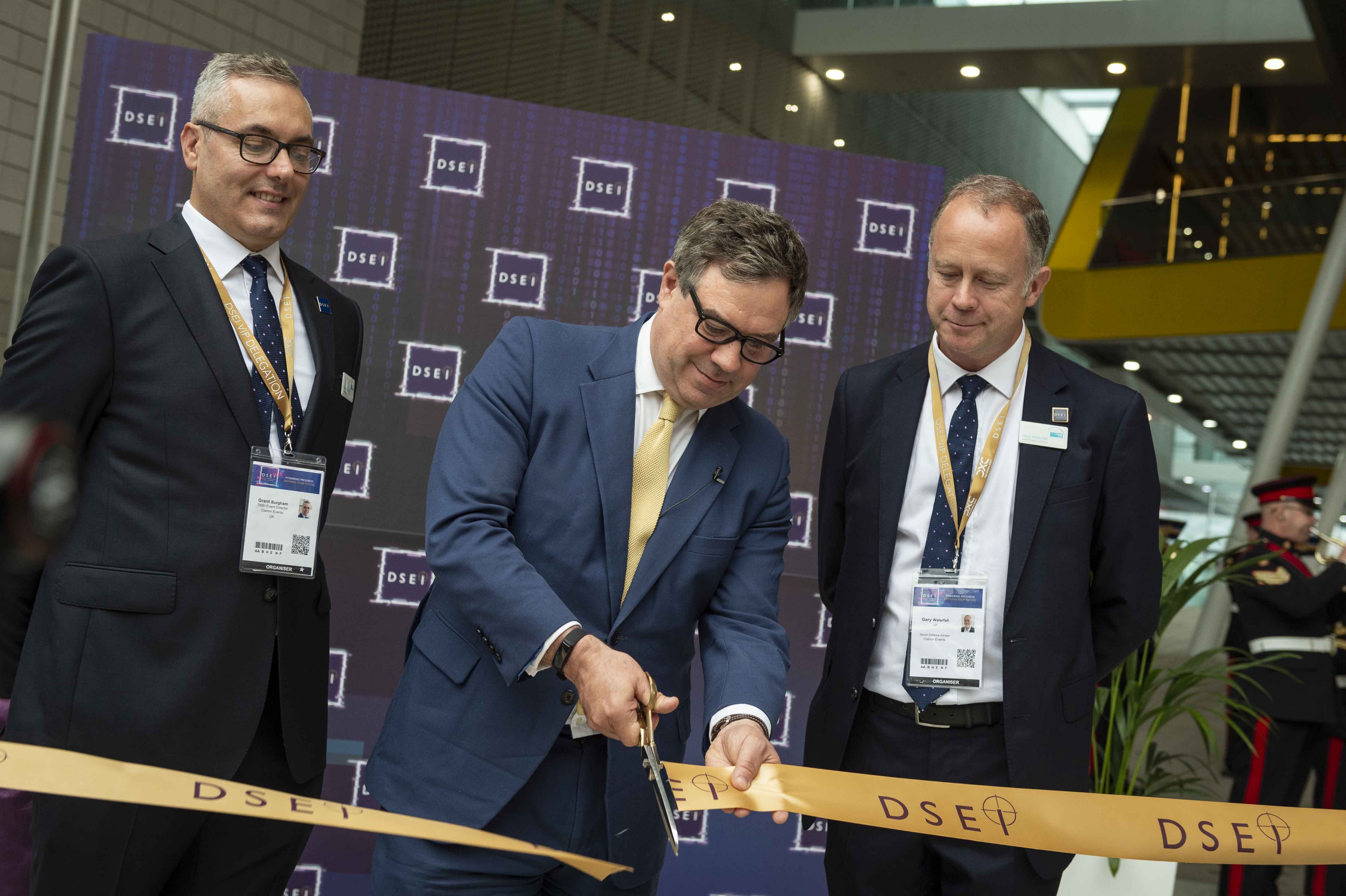 Further supported by an increase of £24 billion of Defence spending over the next four years and an additional £6.6 billion of funding for research and development, this a prime example of how the MOD is using research partnerships with industry to invest in the technology of tomorrow.

These innovative capabilities will be integrated onto existing platforms for the Royal Navy and British Army and will undergo user experimentation from 2023 to 2025. The experimentation will focus on operation and maintenance of these new systems and will provide invaluable knowledge, information and experience to assess whether DEW can be fully embedded on other Defence assets in the future.

MOD Director Strategic Programmes, Shimon Fhima said: “These technologies have the potential to revolutionise the future battlefield for our Armed Forces, enabling the prosecution of new targets in the land, sea and air domains and allowing commanders to meet mission objectives in new ways.” 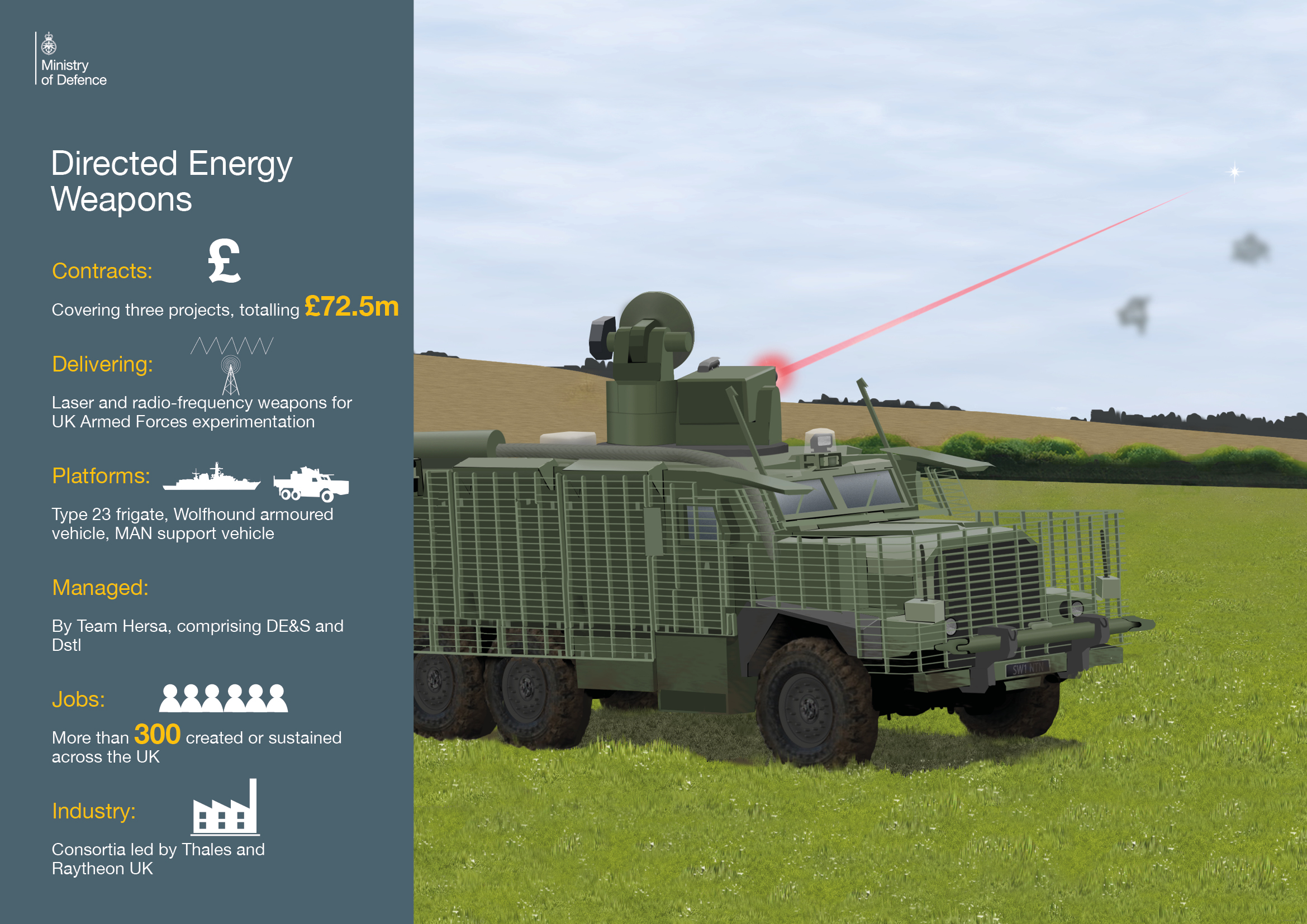 The newly formed Team Hersa brings together the best acquisition skills from Defence Equipment and Support (DE&S) and the best in technical expertise from the Defence Science and Technology Laboratory (Dstl).

Team Hersa will manage delivery of the demonstrators and is responsible for preparing Defence for the introduction of innovative weapons systems, ensuring the UK Armed Forces can successfully integrate the weapons on current aircraft, ships and vehicles.

The new contracts will exploit decades of MOD experience developing cutting-edge laser and radio frequency weapons technology and globally recognised strengths in performance testing and evaluation of these systems.

Thales will lead a consortium including BAE Systems, Chess Dynamics, Vision4CE and IPG to deliver a laser weapon demonstrator for user experimentation on a Type 23 frigate starting in 2023.

They will also lead a consortium including QinetiQ, Teledyne e2v and Horiba Mira to install a high-power radiofrequency demonstrator for up to six months of user experimentation led by the British Army in 2023.

Raytheon UK will lead a consortium made up of Frazier Nash Consultancy, NP Aerospace, LumOptica and Raytheon Technologies to deliver a laser demonstrator for up to six months of user experimentation on a Wolfhound armoured vehicle, with experimentation planned in 2023.