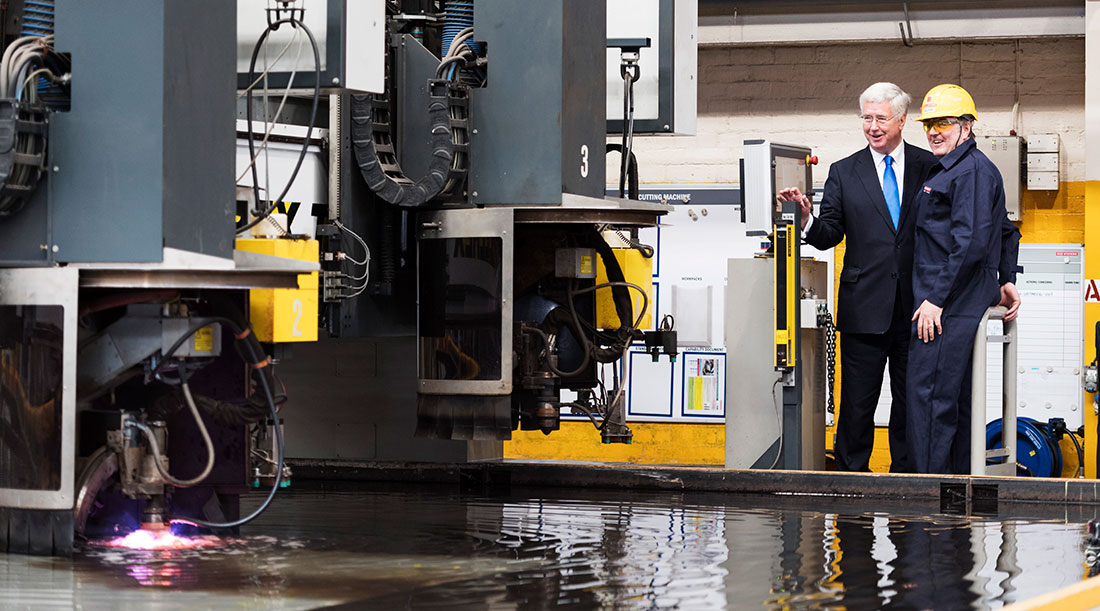 The Defence Secretary has revealed HMS Glasgow will be the name of the first of eight City class Type 26 frigates as he cut her first piece of steel at Govan shipyard in Scotland today. HMS Glasgow will enter service with the Royal Navy in the mid 2020s.

In front of the assembled BAE Systems workforce, Sir Michael Fallon officially began the manufacture of HMS Glasgow the first in a new generation of cutting edge frigates, delivering on the commitment to start production this summer on a programme that will sustain 1700 jobs in Scotland for two decades. Together the three ships being built under the first contract will safeguard 4000 jobs in Scotland and across the wider UK supply chain until 2035.

The Defence Secretary met some of the 260 apprentices that will be supported by the work on the Frigate on the Clyde by the autumn.

Today marks a historic milestone for the Royal Navy, Scottish shipbuilding and UK Defence more widely. HMS Glasgow and the other seven frigates in this new class will protect our powerful new aircraft carriers and nuclear deterrent, helping keep Britain safe across the world.

The Type 26 is a cutting-edge warship that will maintain our naval power with a truly global reach. Designed for a service life of at least 25 years, the Type 26 frigates will form a backbone of the future Royal Navy surface fleet well into the future.

What is the Type 26 frigate?

The Type 26 is an advanced Anti-Submarine Warfare frigate that will provide essential protection to our nuclear deterrent and aircraft carriers, building on the pedigree of the Royal Navy’s current Type 23 frigates.

Its flexible design will allow its weapon systems to be adapted throughout its lifespan to counter future threats. The Type 26 benefits from the latest advances in digital technologies, including 3D and virtual reality, which ensures that the ship’s design is refined earlier in the process.

The Clyde was the birthplace of some of the greatest fighting ships the world has ever known, and so cutting steel there today for the future HMS Glasgow is symbolic of a Royal Navy on the rise once again.

As an island nation, we are utterly dependent on the sea for our security and prosperity, and the City-class names have been chosen for the Type 26 to provide an enduring link between the Royal Navy and our great centres of commerce and industry.

The name Glasgow brings with it a string of battle honours, stretching from the Arctic Circle to the South Atlantic. As one of the world’s most capable anti-submarine frigates, the Type 26 will carry the Royal Navy’s tradition of victory far into the future.

As a world-class ship, the Type 26 has strong export opportunities. BAE Systems and the MOD are exploring these, with interest from international customers including Australia.

This is a very proud moment for all of those who have worked so hard to get the manufacture of the Type 26 underway.

With the first steel cut today in Scotland and further work spread out across the UK supply chain the Type 26 programme is truly a national endeavour harnessing all our skills and knowledge to produce the best possible ships for the Royal Navy.

Earlier this month the Defence Secretary announced the signing of a contract worth around £3.7 billion to start building the Royal Navy’s Type 26 frigates, securing the long term future of the Scottish shipbuilding industry. The contract is specifically structured to motivate both sides to deliver a successful outcome where both parties share in the pain and gain in the delivery of the programme. This will deliver better value for money for the UK taxpayer.

This is a very proud moment for all of those who have worked so hard to get the manufacture of the Type 26 underway.