HMS Audacious, the Royal Navy’s fourth Astute Class submarine has sailed from the BAES shipyard in Barrow in-Furness for her new home at Her Majesty’s Naval Base Clyde, where she will prepare for sea trials before entering operational service with the Royal Navy.

Built by BAE Systems, which employs around 9,000 people in its submarine business in Barrow, including those that work on the Astute programme, the programme supports thousands more working in the UK supply chain.

Ian Booth, SDA Chief Executive of the Submarine Delivery Agency, said: “The departure of HMS Audacious from Barrow is a key milestone in the Astute Class programme. The delivery of our incredibly complex submarine programmes depends on the extremely skilled submarine workforce and close collaboration with our industrial partners across the supply chain to deliver a first class product for the Royal Navy. I am extremely grateful to everyone involved in the significant efforts to meet this milestone and the key roles they have played in the shadow of these unprecedented circumstances to get HMS Audacious to sea.”

Among the most technologically advanced submarines operating in the world today, the departure of HMS Audacious marks a significant milestone in the Astute programme, which is providing seven new attack submarines for the Royal Navy and the capability it needs to defend UK interests at home and overseas. 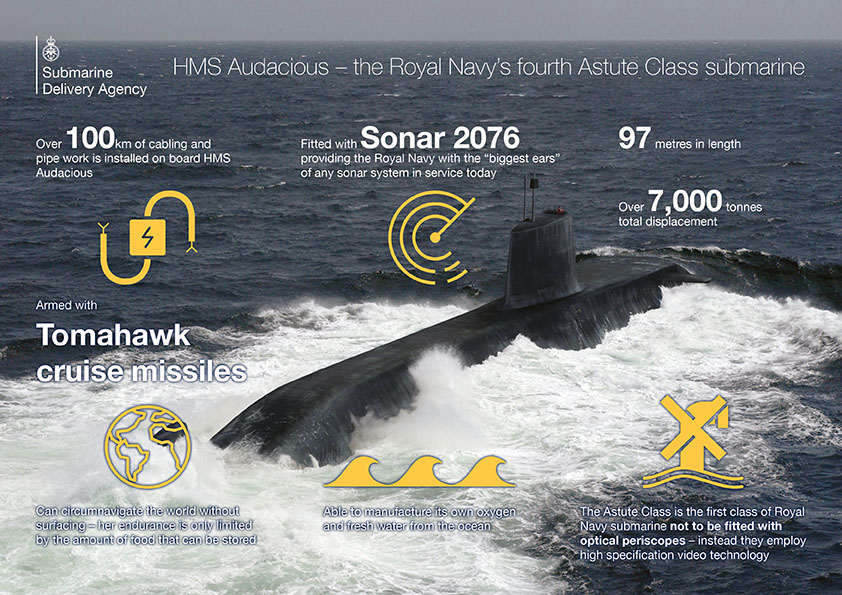 The Astute Class submarines feature the latest nuclear-powered technology and the Sonar 2076. The 7,400-tonne boat can circumnavigate the world submerged, limited only by their food storage capacity, manufacturing the crew’s oxygen from seawater as they go.  They also have the ability to operate covertly and remain undetected in almost all circumstances despite being 50 per cent bigger than the Royal Navy’s current Trafalgar Class submarines which is being replaced by the Astute Class.

HMS Audacious will join HMS Astute, HMS Ambush and HMS Artful, which are already in service with the Royal Navy, contributing to operations and supporting the Continuous At Sea Deterrent posture.  HMS Audacious will be joined by Astute Boats 5, 6, and 7 – Anson, Agamemnon, and Agincourt respectively by the end of 2026.

COVID-19 has changed the way we are working at Barrow and our absolute priority is the health and safety of the workforce and local community. Precautions have been taken to implement social distancing and protection measures on site to allow work on critical operations such as HMS Audacious.