The first three of the UK’s world-leading Protector aircraft are now being manufactured following the award of a £65M ($80M) contract by DE&S.

Protector, which will replace the current Reaper system when it is introduced to the front-line, is considered a step change in capability for the RAF.

The cutting-edge platform will be capable of being flown anywhere in the world while being operated by personnel located at their home base at RAF Waddington, Lincolnshire where it will enter service by mid-2024. 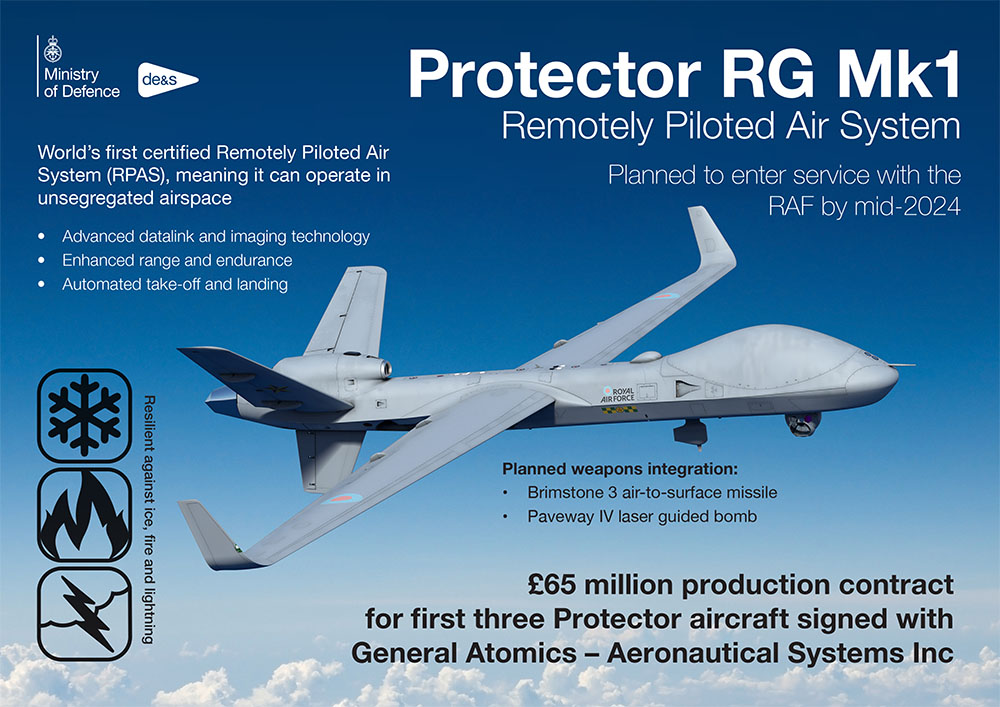 Alongside this a Test and Evaluation contract is already in place to gather evidence for the acceptance and certification of the system.

The production contract includes an option for the build of the remaining 13 aircraft, four ground control stations to complete the current planned fleet of 16 aircraft which will more than double the capability provided by Reaper.

News of the contract was announced by Defence Secretary Ben Wallace during a speech at the Virtual Air and Space Power Conference today (July 15).

Charlie Hazeldean, Head of Unmanned Air Systems at DE&S, said: “Protector is a world-class, ground-breaking capability and is a significant step in capability for the RAF.

“I am incredibly proud of the team who, due to COVID-19, had to manage the final contract negotiations virtually, combined with an eight-hour time difference. Their success is testament to their commitment and the great working relationship they have built with General Atomics.”

Protector will have to meet stringent NATO and UK safety certification standards meaning it could operate in civilian airspace.

It will be deployed in wide-ranging Intelligence, Surveillance, Targeting and Reconnaissance (ISTAR) operations where its ability to fly consistently for up to 40 hours, offers the RAF vastly improved armed ISTAR capability.

It would also be available, if requested, to support civilian agencies in the UK, for example in search and rescue and disaster response missions

“Their efforts and the collaborative commitment from industry means that the RAF can still look forward to the delivery of the cutting-edge Protector and the step change in capability that it brings.”

The fleet will also have advanced anti-icing and lightning protection, providing the RAF with unprecedented flexibility to operate in adverse weather conditions.

The first Protector aircraft will be delivered in 2021 but will remain in the US to be utilised in the test and evaluation phase of the programme. The first aircraft delivery to the RAF will be in 2023.