£800m contract will deliver Europe’s most lethal tank to the British Army, and support around 650 UK jobs

The British Army will receive a fleet of 148 Challenger 3 main battle tanks as part of an £800 million contract placed by DE&S with Rheinmetall BAE Systems Land (RBSL).

Based in Telford, the contract will create 200 jobs at RBSL, including 130 engineers and 70 technicians, with a further 450 jobs to be established throughout the wider supply chain across the West Midlands, Glasgow, Newcastle upon Tyne and the Isle of Wight.

The new tank will carry additional high velocity ammunition able to travel at faster speeds with an increased range. Ammunition will also be programmed digitally from a new turret with a 120 millimetre smoothbore gun. This cutting-edge tank will also feature an upgraded engine with a new cooling system and suspension to improve accuracy when firing in transit.

A new automatic target detection and tracking system will be used to identify threats, whilst new thermal long-range cameras will be fitted as part of a day/night image system.

“This is a significant step forward for Defence and UK industry as we continue to develop and modernise our fleet of land vehicles and I am looking forward to working closely with our industry partners to deliver the very best capabilities we can for the British Army.” 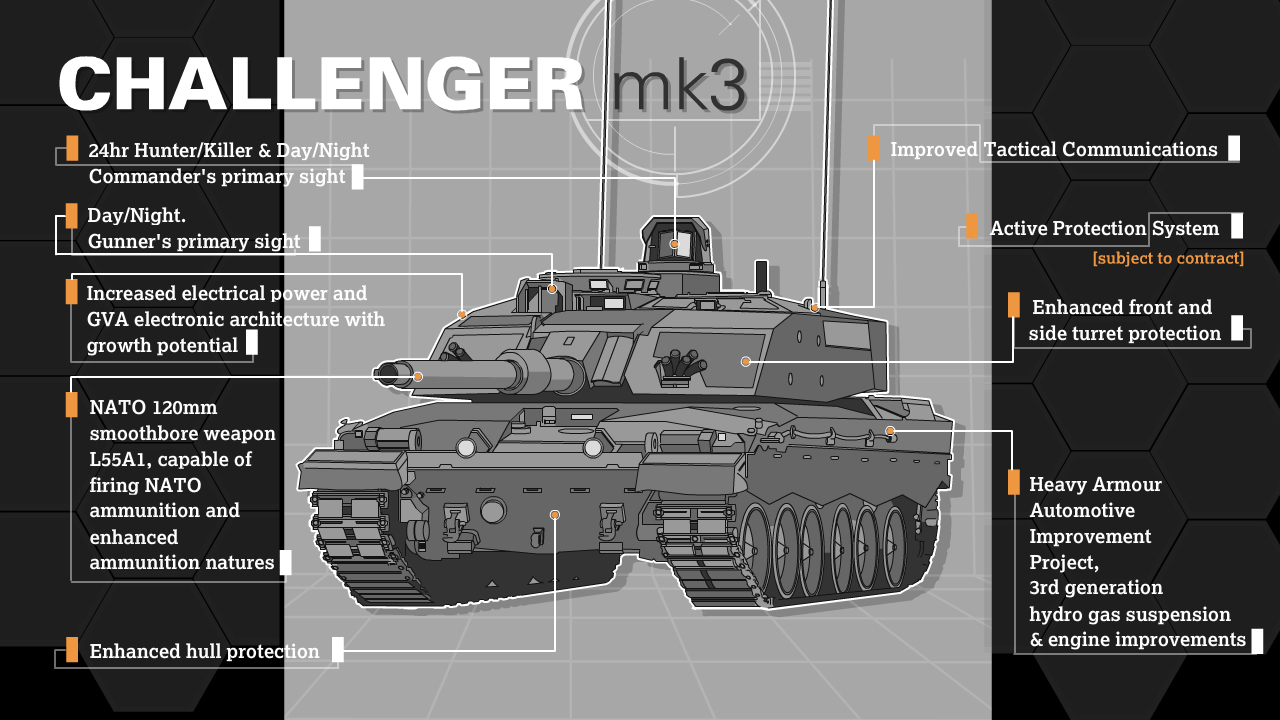 As part of the Army’s commitments to adapt to meet future threats, Challenger 3 will be fully digitalised integrating information from all domains whilst being able to travel up to 60kph. The Challenger 3 tank is being developed to replace the current Challenger 2 tank which has been in service since 1998. Full Operating Capability for the tank is planned for 2030, with initial operating capability expected by 2027.

“This represents a huge shift in the modernisation of our land forces through the increased lethality of Challenger 3. This pioneering new technology allows us to deliver immense warfighting capabilities in battlespaces filled with a range of enemy threats.

“The £800 million investment will also create hundreds of highly-skilled jobs across the country ensuring our soldiers benefit from the very best of British engineering.”

“The announcement of the Integrated Review has provided us with a huge amount of opportunity and left the Army in a good place. The integration of Challenger 3 is key to ensure our success and integration in the land domain, ensuring that we meet our international commitments and continue to protect the nation.”

As outlined in the recent Defence Command Paper, the British Army will be more deployable and better protected in the face of our adversaries. The announcement of Challenger 3 reaffirms our commitment to invest £3 billion into Army equipment over the next decade, delivering a modernised, adaptable and expeditionary fighting force.