More than 200 UK jobs will be supported by a newly-signed contract to build technologically advanced autonomous systems able to defeat modern sea mine threats while reducing risks to life during Royal Navy mine hunting operations.

Following a successful demonstration phase and trials, the UK has invested £184 million in the Maritime Mine Counter Measures (MMCM) programme through a joint production contract with France.

The investment will see around 215 jobs supported in the UK at Thales sites in Templecombe (Somerset) and Plymouth as well as in the wider supply chain including L3 Harris in Portsmouth, Stonehaven in Aberdeen and Alba Ultrasound in Glasgow. 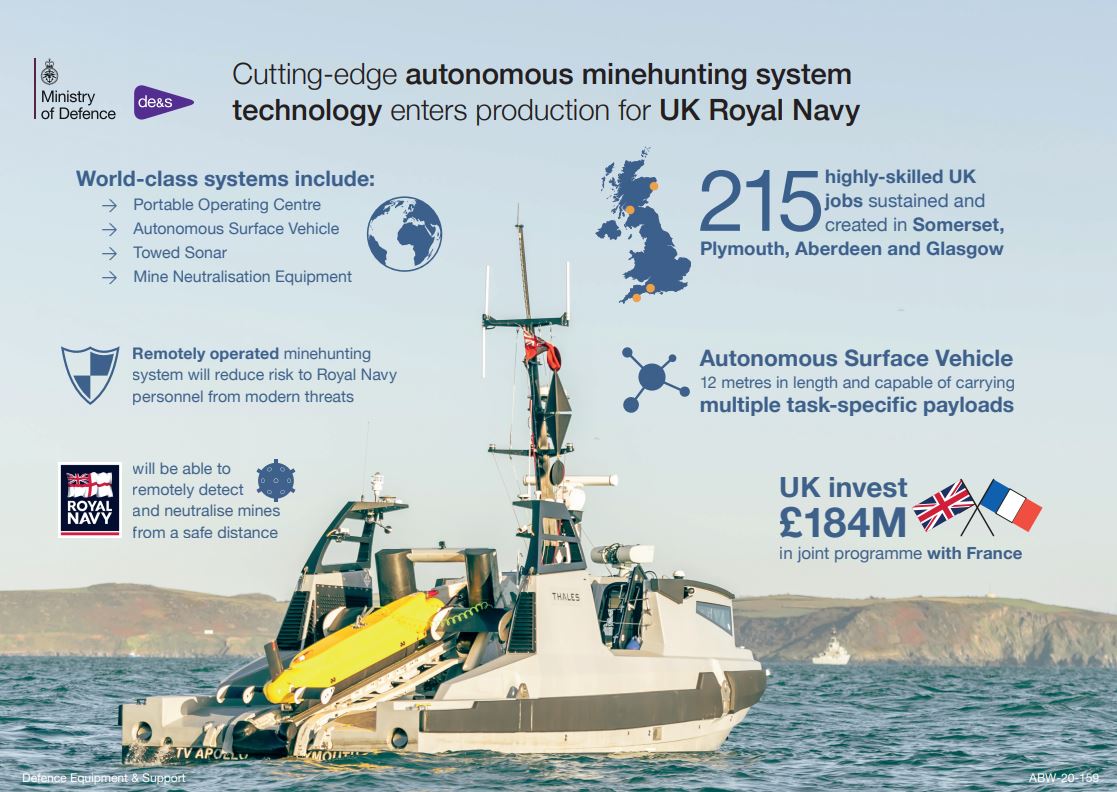 When operational, the new system will give the Royal Navy increased capability to remotely detect and neutralise sea mines. It is designed to potentially replace conventional crewed minehunting vessels, such as the Royal Navy’s Hunt and Sandown-class ships, with autonomous systems.

The UK element of the production contract was negotiated by the Mine Hunting Capability (MHC) team at DE&S.

Barry Miller, MHC team leader,said: “We are constantly working with industry to identify innovative equipment that will provide the Royal Navy with cutting-edge capability. This system is an exciting development and the collaborative working between DE&S, industry, the Royal Navy and our French colleagues is helping make it a reality.”

The contract sees the purchase of three sets of equipment. Each set comprises a portable operation centre, an autonomous surface vessel, towed sonar and a mine neutralisation system.

Sea mines constitute a growing threat and users of this system will be able to detect and neutralise mines from miles away ensuring they can keep vital sea lanes open with much-reduced risk to ships and the lives of sailors.

DE&S CEO Sir Simon Bollom said: “This ground-breaking technology brings with it a step-change in capability for the Royal Navy which is a bold step into the digital and autonomous world. I’m incredibly proud of DE&S and the Royal Navy team who have worked tirelessly with our French colleagues to deliver on this contract.”

The MMCM programme was set up to deliver cutting-edge minehunting equipment to the navies in the UK and France. The programme contract will be placed by the Organisation for Joint Armament Co-operation (OCCAR) acting as the Contracting Management Authority on behalf of both nations.

First Sea Lord Admiral Tony Radakin said: “I am enormously excited by the potential of the future mine hunting capability. This will allow us to deliver mine hunting more effectively, more efficiently and more safely, and to integrate even more closely with our French counterparts in this important area.”

The first equipment is due to be delivered in late 2022. It will commence operational evaluation prior to entering service with the Royal Navy.