This SHORAD system, which entered service with the British Army and Royal Marines in 1997, is designed to intercept a wide range of air threats such as fast jets, attack helicopters and unmanned air systems.

The contract award secures 119 jobs at THALES UK’s Belfast site, as well as more roles in the wider Northern Ireland supply chain and ensures the UK Armed Forces retain absolute confidence in the support and performance of this potent defensive capability until December 31, 2026.

DE&S CEO Sir Simon Bollom said: “Our dedicated team at DE&S has worked closely with industry colleagues to ensure this crucial air defence capability remains primed and ready to support the Armed Forces until the end of 2026.”

Thales UK won the initial contract in 2018, helping to modernise and develop the missile systems as part of the Future Air Defence Availability Project (F-ADAPT). The latest announcement confirms a five-year extension.

The contract was secured by the SHORAD project team at DE&S and ensures this critical capability is maintained during peacetime training, but can also be rapidly deployed for operations well into the 2020s.

Through an innovative approach and collaborative working with industry the DE&S team were able to identify multiple efficiencies and have saved circa 30 per cent on the expected value of the contract.

Barry Gibb, SHORAD In-service Support Group Leader at DE&S, said: “For the team to secure continued industry support of this key air defence capability was a great achievement. The hard work and collaborative working ensures the long-standing partnership with Thales will continue to successfully deliver a key support arrangement to our Armed Forces.”

Under the contract THALES UK will continue to ensure availability and provide support to the UK’s High Velocity Missile (HVM) and new Lightweight Multirole Missile (LMM) Ground Based Air Defence systems, as well as support to live firing training activities at the Royal Artillery Range out to 2026.

The SHORAD system has three platform variants: self-propelled, which allows up to eight missiles to be fired from a Stormer armoured vehicle, a lightweight multiple launcher mounted on a tripod, from which three can be fired and, finally, shoulder-launched (SL) for use by someone firing one projectile at a time.

John Cunningham, the Head Weapons, Evaluation and Capability Assurance (WECA), said: “We are delighted with the award of this innovative £98.4M contract between the UK MOD and Thales. It guarantees the British Army and Royal Marines can remain at high readiness to respond to crises around the world, enabled by working directly alongside Defence Industry partners maintaining the availability of these world-leading Short Range Air Defence (SHORAD) capabilities. Such a significant investment reinforces our confidence in these systems and demonstrates MOD support to Thales’ ongoing export initiatives.”

Alex Cresswell, CEO and Chairman of Thales UK, said: “This is fantastic news for both Thales in the UK and, in particular, our Belfast site.  We are extremely proud of our strong relationship with both the British Army and the Royal Marines.

“This contract demonstrates the real value created by this type of support model between UK armed forces and industry; we look forward to continuing our long-standing partnership with the MoD, helping deliver good value for the taxpayer and retaining this key capability.” 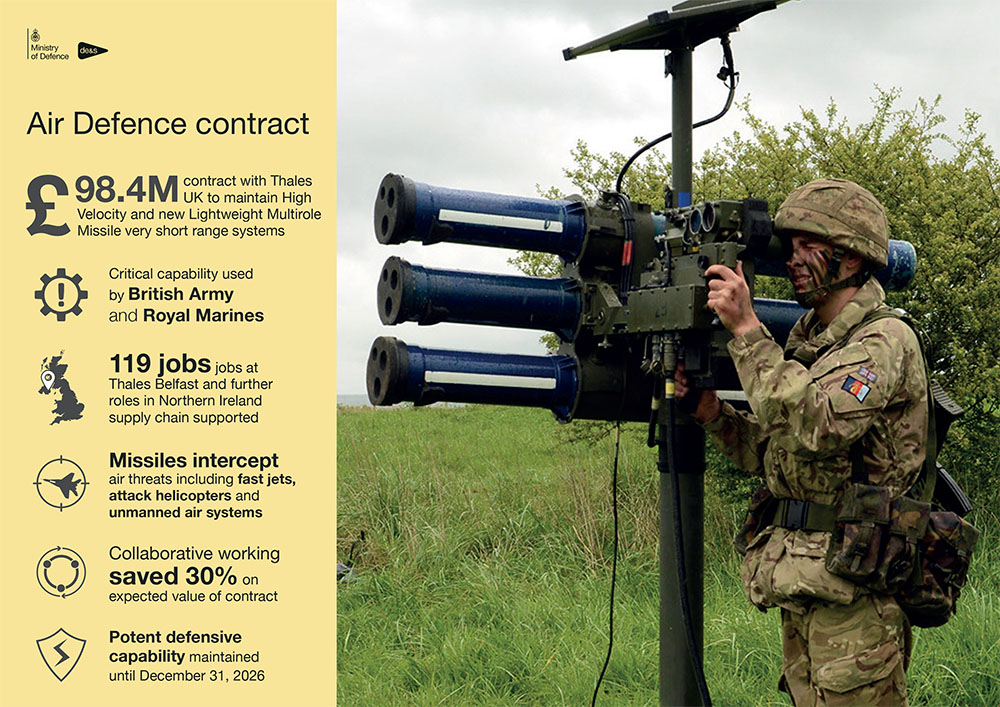