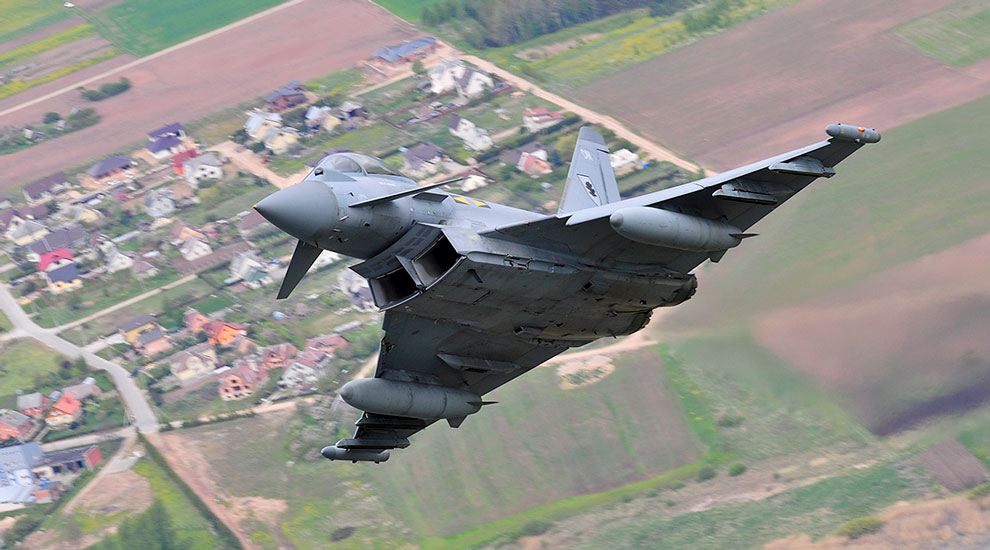 Defence Secretary has announced an investment of £40 million to improve the defence of the Typhoon sustaining over 100 British jobs.

The contract, announced at today’s Airpower Conference in London, has been awarded to UK-based company Leonardo and will upgrade the aircraft’s Defensive Aids Sub System (DASS).

The DASS will upgrade the way the aircraft protects itself from a full range of threats, including enemy aircraft and missiles launched from the ground, enabling it to continue carrying out successful missions like protecting Britain’s skies as part of Quick Reaction Alert and defeating Daesh in Iraq and Syria as part of Op Shader.

Running over a two year period, the contract will sustain 65 high-value jobs at Leonardo’s site in Luton, as well as 41 jobs at BAE Systems in Warton, Lancashire.

Our Armed Forces face ever-evolving threats so we must invest in cutting-edge technology to ensure they can operate in hostile theatres. Our growing Defence budget and £178 billion equipment plan makes this possible; giving UK forces the defences they need to protect them, their kit and the people of Britain.

The RAF’s Typhoon jet is already a state-of-the-art combat aircraft that protects the UK both at home and abroad, but today’s announcement is a clear example of how it is being continually enhanced and upgraded so it remains as effective tomorrow as it is today.
The Typhoon, which provides a Quick Reaction Alert to help protect the UK, is expected to operate in a range of hostile environments with the Defensive Aids Sub System providing a set of self-defence sensors and countermeasures which detect and evaluate potential threats and automatically deploy the most effect countermeasure.

The Typhoon force is currently operationally based at RAF Coningsby in Lincolnshire, RAF Lossiemouth in Scotland and the Falkland Islands.

This contract is the product of close cooperation between MOD and Industry and comes at an incredibly productive time for Typhoon which has also seen a new package of advanced weapons, software and avionics enhancements being tested by Royal Air Force pilots.

This upgrade will ensure Typhoon can identify and defeat known and emerging threats and shows that the MOD is committed to ensuring our Armed Forces have the best equipment and technology available to them.
The Defensive Aids Sub System includes Electronic Support Measures, missile warning, on-board electronic countermeasures and towed radar decoys.