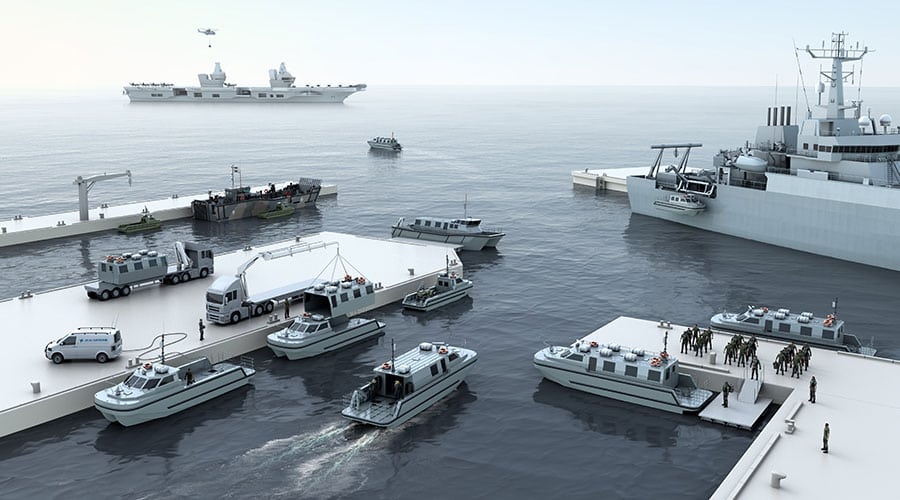 With the Royal Navy growing and Britain’s flagship Queen Elizabeth Class carrier now set to enter her new home, Defence Minister Harriett Baldwin has announced a £48 million contract for next-generation workboats which will support both British ships and British jobs.

The fleet of up to 38 workboats will assist Royal Navy ships from UK bases and on operations all over the world.

With Britain’s flagship HMS Queen Elizabeth Carrier set to enter her new home in Portsmouth in under two weeks time, tasks to be carried out by the boats will include transferring personnel to and from both of the UK’s carriers. Able to carry up to 36 passengers at one time, the workboats can be stowed inside the Carriers and winched to and from the water using on-board lifting equipment, allowing them to support the enormous ships either in port or on operations.

Building and supporting the boats will also sustain 60 British jobs, including 15 at Atlas Elektronik UK near Dorchester in Dorset where the boats will be built. A further 45 jobs will be sustained across the supply chain, including at E P Barrus in Bicester, KPM-Marine in Birmingham and Mashfords in Plymouth. 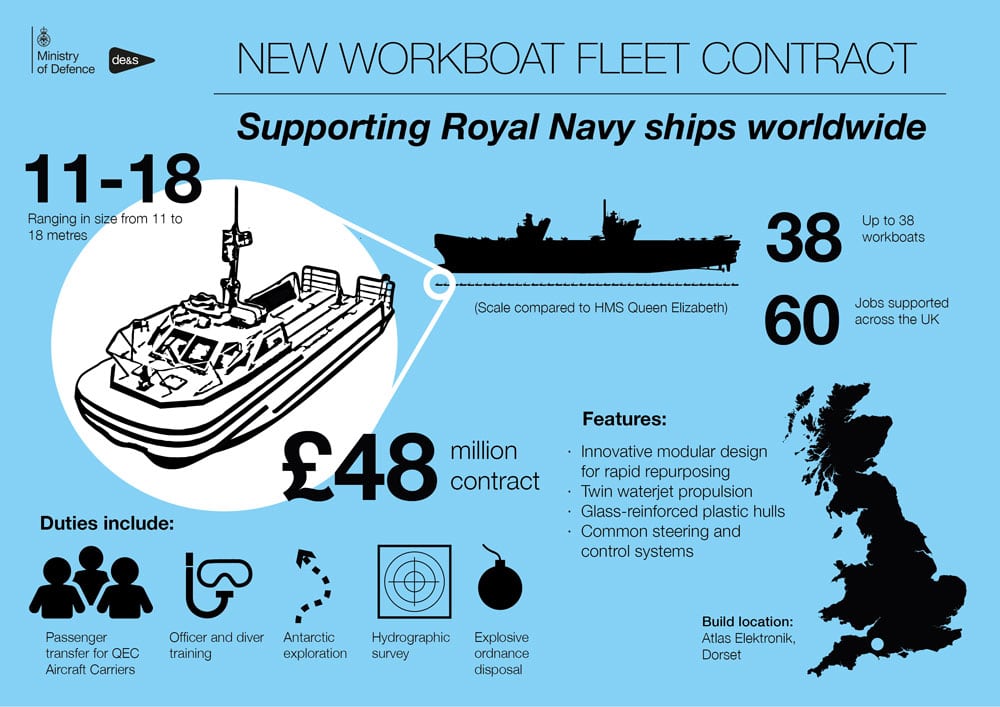 The £48m contract will support UK carriers and UK jobs.

From the south coast to the banks of the Clyde, British shipbuilding is ensuring that our growing Navy has the reach it needs to protect our interests around the globe. These cutting-edge workboats will support the likes of our iconic new aircraft carriers and the Type 26 frigates, as well as sustaining 60 British jobs. This is another step in our £178 billion plan to provide our Armed Forces with the very best equipment to keep our country safe.

Ranging in length from 11 to 18 metres, the boats will also perform other tasks including officer and diver training, Antarctic exploration and explosive ordnance disposal.

They are highly adaptable to operational demands thanks to their cutting-edge modular design elements. For example, if the Royal Navy wished to quickly redeploy a boat from hydrographic survey duties to support diving for explosive ordnance, the survey module can be quickly lifted out of the boat and replaced with the diving module containing the high pressure air required for that task.

This was a challenging process in which the team had to satisfy many different user groups with just one class of workboat. That is why we came up with a concept where different modules could be fitted to the platforms dependent on task.

We are very proud of this deal, as it will result in a major uplift in capability in terms of speed, payload, operational area and navigational suites. It was an extremely steep learning curve but seeing the workboats now come together has made all the hard work worthwhile.

The contract will enable the design and construction of up to 38 boats as well as in-service support for the fleet for a further two years after the final boat is accepted. The first boat will enter service next year.

These boats use modern materials and have been designed from the keel up to provide the Royal Navy with unparalleled flexibility and adaptability.

DE&S is proud to maintain excellent working relationships with partners across UK industry, ensuring our Armed Forces continue to be provided with the equipment they need while also maintaining vital British skills and jobs.

The boats will all feature glass-reinforced plastic hulls and advanced twin waterjet propulsion. Despite their varying roles, they will all have the same steering and control system, reducing the need for training and making them simpler to operate.

It was an extremely steep learning curve but seeing the workboats now come together has made all the hard work worthwhile.