Steel was today cut for HMS Venturer, the first vessel of the Royal Navy’s Type 31 frigates procured by DE&S that will be at the centre of its surface fleet.

It was a proud day for the Type 31 team at DE&S which has worked with unprecedented speed alongside the Royal Navy and industry to deliver this complex contract.

It was through this collaborative working that saw steel being cut at Rosyth dockyard less than two years after Babcock International signed a contract with DE&S in November, 2019.

“Being part of this fast-paced project is certainly one of the highlights of my career with DE&S.

“Our project team, together with our Navy Command colleagues and industry partners, have met this unique challenge head on and through a shared belief in collaborative and innovative working practices achieved our incredibly challenging goals at pace despite the pandemic.

“Seeing the cut of steel for the first Type 31 is a source of immense pride and a tribute to the hard work of everybody involved.”

The steel cut, undertaken by Defence Secretary Ben Wallace marks a significant milestone in the programme for the Royal Navy, Defence and shipbuilding in Scotland, with all five vessels to be built by Babcock on the Firth of the Forth and an average production cost of £250 million per vessel.

Deemed the lead programme of the National Shipbuilding Strategy, the construction of the Class will support around 1,250 highly-skilled jobs at Babcock and see the creation of an additional 150 apprenticeships. A further 1,250 roles in the UK supply chain are also expected to be supported by the programme.

“I am incredibly proud of the Type 31 team at DE&S who worked tirelessly to deliver the contract award in timescales unprecedented for a procurement of its size and complexity.

“The pace and agility of the team and their close working relationship with industry has meant that now, less than two years later, we have witnessed the start of production of a vessel that will play a pivotal role in the Royal Navy fleet and inspire a new UK shipbuilding renaissance through realising the goals of the national Shipbuilding Strategy.”

The newest of the Royal Navy’s frigate fleet will undertake a variety of roles on operations including interception and disruption of illegal activity at sea, intelligence gathering, Defence engagement and providing humanitarian support.

The Type 31 will be equipped with innovative technology and will benefit from advanced capabilities fitted onboard, including MBDA’s Sea Ceptor, a supersonic anti-air missile defence system, as well as a 57mm and two 40mm Bofors naval guns, a 4D radar system and able to house a Royal Navy helicopter.
With agility and flexibility integral to its design, the Type 31 weapon systems will also be adapted throughout its lifespan to counter future threats and ensure each ship can be equipped to deliver a forward naval presence across the globe.

“Today is a momentous occasion for the Type 31 programme, Defence and the shipbuilding industry in Scotland. I was delighted to cut the steel for the first of five new frigates that will be constructed here on our shores, in the Firth of the Forth.

“Equipped with the innovative technologies at the forefront of the Royal Navy’s future vision, the entire Type 31 fleet will be fitted with a range of capabilities allowing it to undertake a variety of operations at sea.”

Known as the Inspiration class, the five Type 31 vessels all take their names from former warships and submarines whose missions and history are intended to inspire Royal Navy operations, as well as a representation of its future vision. The four remaining ships in the Class were recently announced as HMS Active, HMS Formidable, HMS Bulldog and HMS Campbeltown.

Constructed in 1942, the original HMS Venturer was a World War Two V-class submarine that most notably was the first to sink another submarine, a German U-boat, while both were submerged using its technological and intelligence advantage over the enemy. Almost 80 years later since construction started on the original HMS Venturer, its Type 31 depiction draws on its historical achievements and aims to promote the Royal Navy’s technological and innovative forward-look.

“Type 31, built at Rosyth and supporting over 2,000 jobs, is a hugely important future capability for the Royal Navy and represents a significant export opportunity to friends and allies overseas.”

As announced by the Prime Minister last November, Defence has received an increase in funding of over £24 billion across the next four years, enabling our Armed Forces to adapt to meet future threats of which the Type 31 will form a part. Enhanced by commitments outlined in the Defence Command Paper, the new frigates will form part of the Royal Navy Integrated Force 2030 vision and will replace the five general-purpose Type-23 frigates currently in service with the Royal Navy.

During his visit to the Rosyth dockyard also unveiled a plaque to mark the formal commissioning of Babcock’s new Assembly Hall. As part of a wider £35 million site investment by Babcock, the state-of-the-art and digitised facility will be capable of housing two Type 31 vessels alongside each other during their build phase.

“This is an exciting time for the Royal Navy. The Type 31 represents the very best of British shipbuilding and with its modular design will be configurable to meet the needs of both the Royal Navy and our allies around the world, now and into the future.

“Type 31s will operate across the globe with sustained forward presence, further signifying our intent of being a global navy and the foremost naval power in Europe.”

The entire Type 31 fleet is expected to be delivered by the end of 2028 and to enter service with the Royal Navy by the end of 2030, with the first expected in the water in 2023. The Type 31 will carry a crew of up to 105 that will be deployed on duties around the world, working alongside new Type-26 frigates.

Its design is based on Babcock’s Arrowhead 140 which has already attracted international export opportunities. Babcock signed the first export contract with PT Pal of Indonesia, at this year’s DSEI and is also one of the bidders down selected to provide a potential design solution for the Polish Navy’s Miecznik (Swordfish) frigate programme.

The Type 31 is the first warship competition for over a decade, with the initial contract award by DE&S marking a significant achievement of meeting the challenges outlined by Sir John Parker in the National Ship Building Strategy, announced in September 2017. 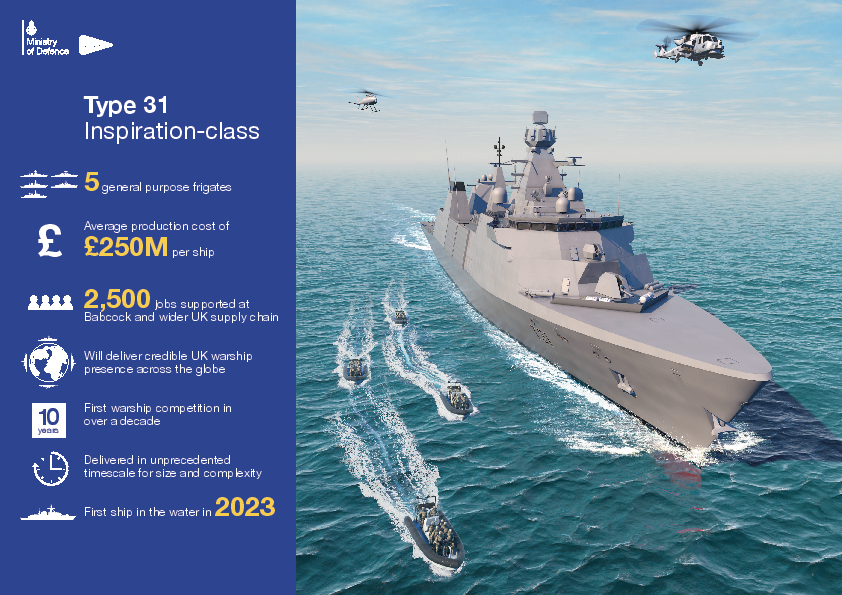