The 90-metre ship, which will deploy across the globe on counter-terrorism and anti-smuggling operations, was formally named HMS Medway by her Sponsor, Lady Wendy Fallon, in a ceremony at the BAE Systems Scotstoun shipyard in Glasgow.

This year we have already named our second aircraft carrier, two Type 26 frigates and the first in the Offshore Patrol Vessel class. It is a privilege to see yet another ship named for the growing Royal Navy. Named after Kent’s main river, my family has taken a particular interest in HMS Medway over the course of its construction and this is a proud day for all involved.

From counter-terrorism and anti-smuggling to securing the UK’s borders, HMS Medway will help keep Britain safe. 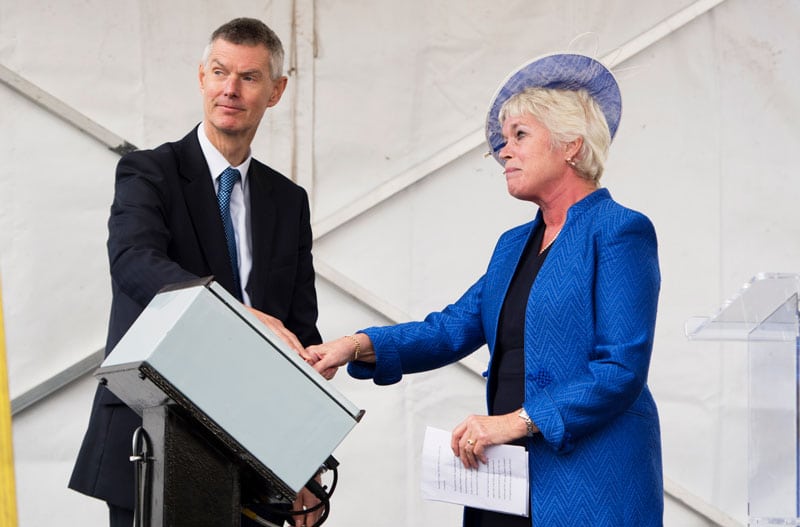 The work to build the ship, along with its four sister ships, is sustaining around 800 Scottish jobs at BAE Systems and is maintaining vital skills needed to build the new Type 26 Frigates – the first of which, HMS Glasgow, is currently under construction across the Clyde in Govan.

The Second of the OPVs, HMS Medway is expected to enter service with the Royal Navy in 2019, with all of the new Batch 2 River class OPVs expected to be in service before the end of 2020. The first of class, HMS Forth, is currently on sea trials.

HMS Medway is named after the River Medway in Kent which, as home to the Chatham Historic Dockyard, has been associated with the Royal Navy since Elizabethan times.

Lady Fallon, wife of Defence Secretary Sir Michael Fallon whose Sevenoaks constituency is bordered by the River, broke a bottle of gin on the bow in honour of the Chatham dockyard, where the gin was distilled.

The tenth Royal Navy vessel to bear the name since the 1690s, HMS Medway is officially affiliated with the Medway district through an association with the local Council.

It is wonderful to see the Royal Navy’s newest ship christened with a name steeped in maritime history. As an island nation, the sea is Britain’s frontline. HMS Medway and her four sister ships will form the first line of our defence, protecting the security of our home waters and upholding the sovereignty of our overseas territories.

HMS Medway is a fine ship, ideally equipped to hunt down terrorists, pirates and people traffickers. But the most impressive element of all is the young men and women who will take her to sea. They’re bright, motivated and ready to do their bit for Crown and Country.

Displacing around 2,000 tonnes, she has a maximum speed of around 24 knots and can sail 5,500 nautical miles without having to resupply. She is equipped with a 30mm cannon and flight deck capable of accommodating a Merlin helicopter, and manned by a crew of 58 sailors.

Delivery of the OPV programme is one of the key commitments laid out in the Strategic Defence and Security Review 2015.

The naming of HMS Medway is a proud moment for the Royal Navy, supported by DE&S, and our Industry partners and is a significant milestone in the delivery of this world-class fleet of five new warships.

I look forward not only to the deliveries of the final three OPVs, but continued good progress on the Type 26 programme which the OPV programme has enabled through the sustainment of jobs and skills. 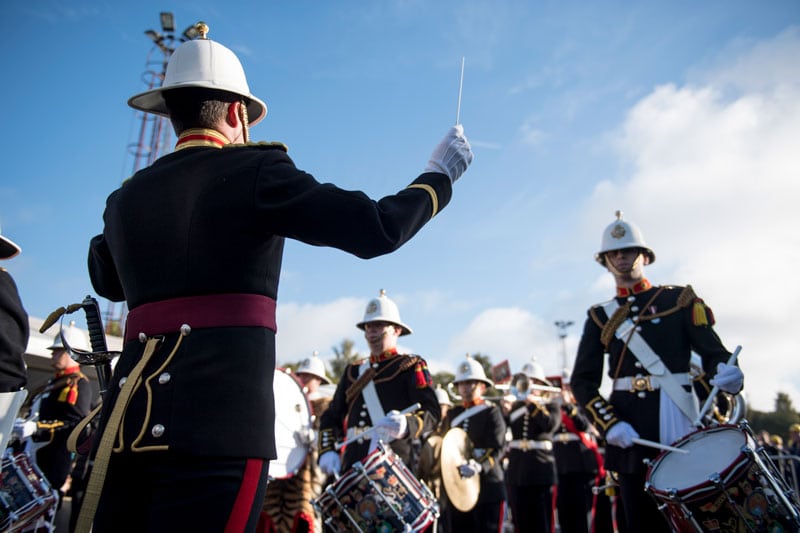 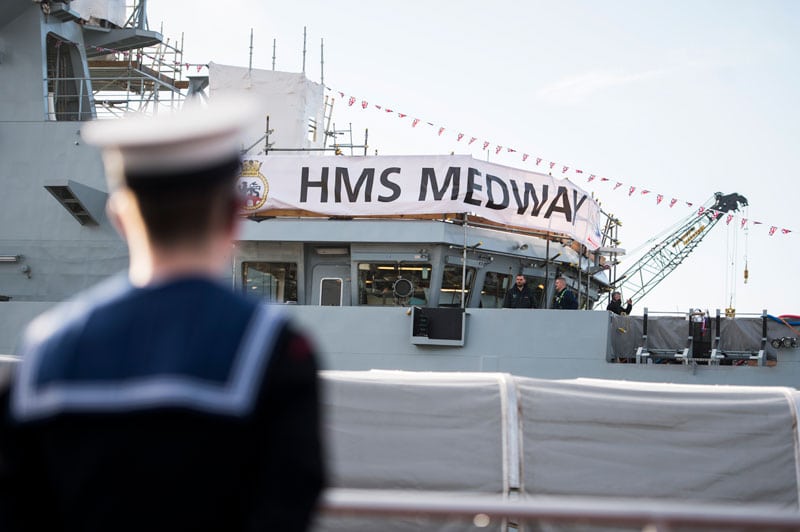 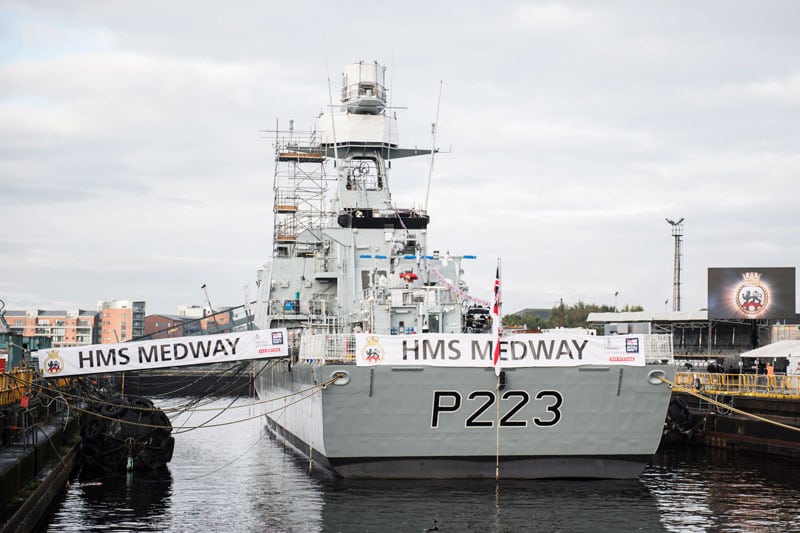 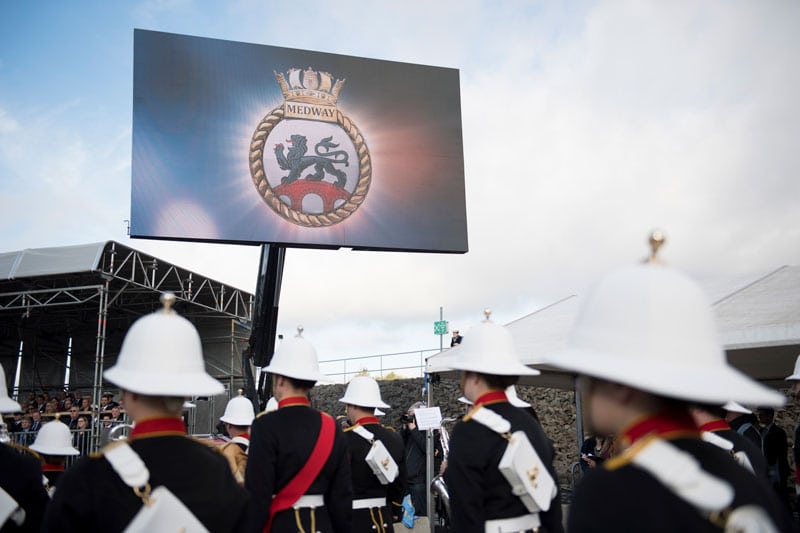 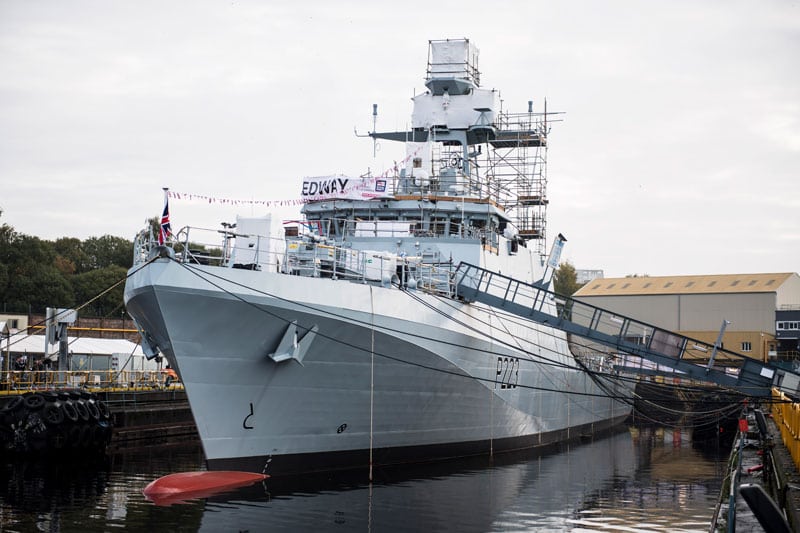