“Being a female engineer means bringing a different perspective to the problem at hand, or a different working style to the team. Diverse teams can come up with more innovative solutions – one reason I’m passionate about encouraging more women into the STEM industry!” 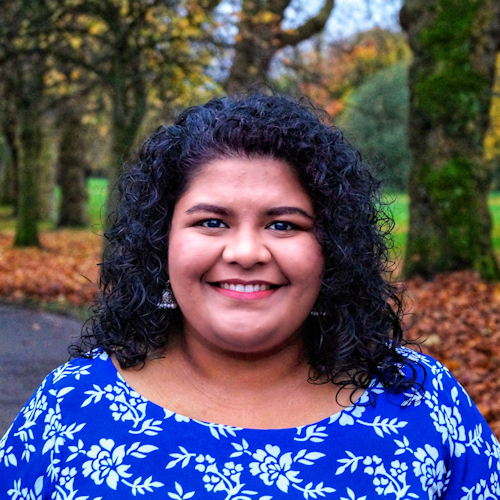 Can you tell us about your background, how you got to where you are now, and about your path into DE&S?

I completed a master’s degree in aerospace engineering at the University of Liverpool, where we were exposed to a lot of defence-related material which really sparked my interest in this sector. I started at DE&S as a graduate engineer, then joined a team specialising in flight simulation – this team uses a range of devices and systems to replicate an aircraft so we can train people like engineers and load masters without creating a risk to aircraft currently in operation. I visited site a lot and experienced flight simulations, which was very interesting. I’ve now moved to another team called the Combat Air Strategy team, where my role is focused on airworthiness and the safety of future aircraft – we make sure aircraft is ‘air ready’ and everyone who uses it will be safe.

My role is to ensure that the aircraft we bring into service will be safe. It’s an integral part of making sure we provide safe equipment to our armed forces. It means working collaboratively with our customers and suppliers and getting plenty of exposure to the forces on the front line to understand the challenges they face.

What sparked your interest in aerospace?

I’ve been flying since I was a small child because my parents lived in the UK and I lived in India; I spent a lot of time flying between the two countries. In India, I grew up in a town which has a big air force base. The jets and helicopters always fascinated me, and I used to imagine how cool it would be to work on one.

What was it about DE&S that influenced your decision to join straight after your degree?

I knew a few graduates from university who were on a programme at DE&S and they really sold it to me. I wanted the opportunity to do something different. I liked the fact that you can do different placements to broaden your expertise, including within industry. DE&S also offered support for chartership which was one of the main aims of the graduate scheme when I joined. Being chartered means that someone independent has assessed you and has verified that you are competent to make engineering decisions, based on your education and experience.

Can you tell us about an exciting project you’ve worked on?

During the graduate scheme, I was the Project Officer for the Schools Build-A-Plane project, run by the Royal Aeronautical Society (RAS) and Boeing. The premise was that school children from 10-18 years of age built a kit aircraft that was then sold on to private buyers, after obtaining its Permit to Fly. My role involved ensuring the safety elements were in order and helping the project run effectively. It was a really rewarding experience to see the pupils being able to fly in a plane they built, and to see everyone who had worked so hard on this project come together and witness the first flight. It emphasised the need for organisations to promote STEM subjects (science, technology, engineers and maths), and encourage more people – especially girls – to choose STEM careers.

Can you tell us more about promoting STEM careers to women?

I’m passionate about getting more women into the STEM industry, where they’re currently underrepresented. I’m a STEM ambassador and I’ve attended a couple of events as a representative of DE&S. The last event I did was the Cheltenham Science Festival in 2019 which was a really fun event – we laid out a track and taught children to programme a robot to go around the track. I’m also the co-chair of the Engineering Development Network Association for the Air domain, known as EDNA, which I helped to set up. We have guest speakers talk to us about interesting topics, which sparks people’s imaginations and encourages us to develop our knowledge. We host lots of other activities, too, that are accessible and inclusive for everyone, at any level.

How does being involved in the network make you feel?

It’s one of the things I’m most proud of, and it’s great knowing that we’re doing something that is valuable for young and developing engineers. By growing this network, we’ve created a community and a point of contact to ensure people to really feel supported, whatever stage they’re at in their career.

What pathways are there into a career as an engineer? Is it a difficult career to get into?

Not at all, there are lots of ways to get into engineering, whether it’s through an apprenticeship, degree or experience. DE&S offer a variety of apprenticeships and graduate schemes. All you need is the drive and curiosity.

Sometimes I’ve been in meetings where I was the only woman in the room, however I’ve never found that my views weren’t respected because I was a female engineer. It can sometimes mean bringing a different perspective to the problem at hand, or a different working style to the team. Diverse teams can come up with more innovative solutions – another reason why I’m so passionate about encouraging women into the fascinating world of engineering!

How do you feel DE&S supports you to develop and drive your career development?

To take ownership of your own progression, you have to seize opportunities on offer and DE&S will support you along the way. The organisation can fund annual membership fees for professional registrations, which is a great resource for driving your development through information, networking and events.

When you join the organisation, you’re assigned a Functional Development Officer (FDO) too, who is your first point of contact for any career-related advice and they support you as your shape your career, helping you identify suitable courses and new opportunities. DE&S recognises that professional development is important, and I would definitely say that they support you to achieve your ambitions.

In your mind, what makes DE&S stand apart from other organisations?

We get to work on a lot of unique projects that most people wouldn’t get the opportunity to – and even if you’d worked on part of a system elsewhere, it’s very rare to get the kind of bigger picture view that you see in DE&S.

Flexible working is also a valuable benefit that sets DE&S apart, so I can shift my schedule around other commitments and save up banked time to take extra days off. Being able to work from home is really useful too, so I only go on-site I there’s a specific reason – here the attitude is that your outputs are important, not the time you log or where you work. Our leaders are approachable people which is refreshing, and I think that’s quite unique to DE&S.

What do you think around your next step forward career wise?

I’m interested in promotion in the future, though also I think a ‘Z-path’ step into project management would be interesting, to experience and better understand that side of the organisation. As an engineer, I like to understand how things work, so it would be great experience to do that from a different perspective, and DE&S is supportive in facilitating that type of internal movement. Whatever that next step is, I’m feel excited and supported to expand my horizons and understand the bigger picture.

Can’t find a Engineering job for you today? Search all our vacancies.