“Having a requirement and working out how best to achieve it in a digital solution – I love it! That moment when you’ve been stuck on a problem and then the penny drops and you figure out the issue – it generates a great feeling of personal accomplishment.”

We recently spoke with Nathan about his role as a Developer in the DE&S Digital team, career development opportunities and his hobbies outside of work 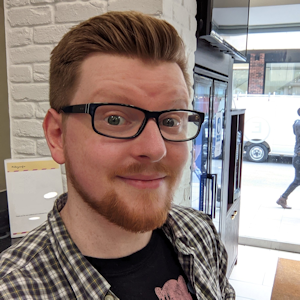 What does your role entail? What do you enjoy most about it?

I’m a Microsoft PowerPlatform Developer. I work in an Agile team and we use agile project management software called Jira to manage our workload. Each day we have a daily stand up to discuss any blockers and share progress made on our assigned tickets. Each sprint usually lasts two weeks and afterwards we have a review to discuss how it went and what we have learned.

In terms of the actual machinations of my job; I create, edit, and manage solutions, primarily based on a tool called PowerApps. We work alongside internal customers and business analysts to complete requirements for our internal customers by creating new apps and maintaining existing ones.

What was your pathway into this career?

When I joined the MOD in 2013, I worked in a team where the main focus was assisting internal customers with IT and Knowledge & Information Management (KIM) matters. I’ve always had a passion for IT and in this role I was able to utilise it. In 2015 I was promoted to a different team and my responsibilities grew. In 2019, I moved to a new team which focussed on creating digital solutions for the Information Management & IT Function. This was small, but it was a step closer to a more IT-focussed role, whereas my previous roles had been more about information management. Finally, in January 2020 I secured a position in DevOps and it’s a fantastic role where I feel my strengths are being utilised.

What learning and development opportunities are available in your team?

Since joining the DevOps team, I’ve attended a coding course in HTML, JavaScript, and CSS. This was in preparation for a project where coding skills were needed. We’re currently in the process of securing a PowerApps training course which will result in myself and others becoming certified Microsoft Developers. We also have access to a whole library of learning and course hosted by the Defence Academy.

Do you feel supported to achieve your professional ambitions?

Absolutely. I was given the role of Product Owner for a few sprints recently which put me in charge of the team and its outputs for that project. I’ve even gone solo on running a small project of my own and created a Mental Health First Aider hub and app. Our team is merging with another team soon and I’m hoping to gain a promotion using the skills and knowledge that I’ve had the opportunity to demonstrate.

Interested in a career in Information Management and IT?

What is it that makes your role rewarding?

I recently received an award for the work I took on as Product Owner which was great, but it’s working on the digital, IT-based activities that I find really rewarding. I love getting stuck into a new project. Having a requirement and working out how best to achieve it in a digital solution, troubleshooting issues if and when they arise – I love it! Even though PowerApps is labelled as ‘low-code’ – which means minimal coding by hand – there is actually still a lot of coding involved in order to make the magic happen, and it’s very satisfying to see it come together. That moment when you’ve been stuck on a problem for hours and you’ve run out of ideas and then the penny drops and you figure out the issue; it’s priceless and it generates a great feeling of personal accomplishment.

How does DE&S support you to find the right balance between your work and home life?

Flexible and remote working has been great, I have so much freedom to work at a time that suits me, and it makes it much easier to manage tasks at home, like putting the washing out and that sort of thing. I’ve been into the office occasionally and have seen my team at socials, but working from home is a real positive for my work-life balance.

I volunteer at the Wild Place Zoo near Bristol on Thursday afternoons. I do a half day on Thursday and make up the hours during the week. Flexible working enables me to do this and my Team Leader – who volunteers for the Royal National Lifeboat Institution – and line manager are happy for me to do it. It’s a great feeling to be able to volunteer and it gives me time to be outside and spend time with the exotic animals (another passion of mine).

Are you a member of any professional bodies?

I’m a member of both the British Computer Society (BCS) and the Chartered Institute of Library and Information Professionals (CILIP). I’ve not had the time to pursue being affiliated or chartered by either of them yet but it’s something I’d like to consider in the future.

What are your hobbies outside of work?

Too many. I’m a huge geek and spend a lot of time gaming – on my Xbox Series X mostly but I also have a huge collection of board games! I’m working on designing a few video games of my own in my spare time, and I also do a 5K Park Run every Saturday at various locations in Bristol such as Severn Bridge, Eastville Park and Chipping Sodbury.

What’s one thing that might surprise people about you?

Last year I started whittling a chess set. I’m over halfway and have only three more each of the Pawns, Rooks, Knights, and Bishops, plus the King and Queen pieces.

Would you recommend DE&S to others as a great place to work, and if so, why?

Absolutely. Job security aside, there are tons of reasons why working for DE&S is great – flexible working hours, trust from your delivery management to own your outputs, the vast array of career options available if you’re interested in moving roles, the great people and their diversity and levels of skill.

Latest Information Management and IT vacancies

Can’t find an Information Management or IT  job for you today? Search all our vacancies.