Work has begun on a £132m facility for the UK’s new fleet of submarine hunting Poseidon Maritime Patrol Aircraft (MPA) at RAF Lossiemouth in Scotland today.

The aircraft, procured by DE&S, will play a key role in protecting the UK’s submarine-deployed nuclear deterrent and its two new aircraft carriers, whilst it can also deploy missiles capable of destroying enemy submarines beneath the sea.

The aircraft will work alongside eight cutting-edge new Type 26 warfare frigates – which also have their roots firmly in Scotland, where they are being built at BAE Systems’ yard in Govan. Later today the Defence Secretary will visit the shipyard to view the first completed unit of the new anti-submarine warship, HMS Glasgow, in the shipbuilding hall where it is being connected to the second unit and will be joined by others as the ship takes shape.

“The start of construction marks the culmination of many months of detailed work by my team in DE&S, together with colleagues from Air Command, Defence Infrastructure Organisation, Defence Portfolio and Approvals Secretariatand Boeing Defence UK.

Delivery of the strategic facility will also provide one of the first tangible symbols of the re-establishment of a fixed-wing maritime patrol capability in the UK.”

The news comes at a time when the Defence Secretary has warned that Russian submarine activity has increased ‘ten-fold’ in the North Atlantic sea.

Together the aircraft and ships will protect the UK’s submarine-deployed nuclear deterrent and its two new aircraft carriers. In addition to boosting the UK’s surveillance capabilities, they are both designed to conduct anti-submarine and anti-surface warfare, search and rescue and to conduct intelligence gathering.

“I am extremely proud of the work that the MOD has done in collaboration with Boeing Defence UK to secure this investment in vital infrastructure for the P-8A aircraft.

“This new strategic facility at RAF Lossiemouth demonstrates our commitment to ensuring that our aircraft are maintained and personnel who operate them are properly supported.”

The new Lossiemouth facility will be completed in 2020, to coincide with initial operating capability of the Poseidon aircraft being available in the UK. Built by Elgin-based Robertson Northern, it will comprise a tactical operations centre, an operational conversion unit, squadron accommodation, training and simulation facilities and a three-bay aircraft hangar.

“These submarine hunters will play a vital role in keeping the UK safe from the increasing threats and aggression we face in the skies, on the sea and below the waves.

“This massive investment demonstrates the huge contribution Scotland makes to protecting Britain and how defence generates prosperity and opportunity.

“Moray is benefitting from 200 local construction jobs during this building phase, with the number of personnel employed at RAF Lossiemouth growing by 470 to 2,200 people when this is complete.”

At the peak of construction, the project will support 200 local jobs. When the fleet is fully operational, some 470 additional personnel will be based at RAF Lossiemouth, taking the total number of people employed there to 2,200. Further roles are also expected when the training and support services are established at the new facility.

In addition to that, the Type 26 frigate programme will sustain 1,700 BAE Systems jobs in Scotland, safeguarding a total of 4,000 jobs across the wider UK supply chain until 2035. The next generation highly capable and versatile multi-mission warship designed to support anti-submarine warfare, air defence and general purpose operations anywhere on the world. 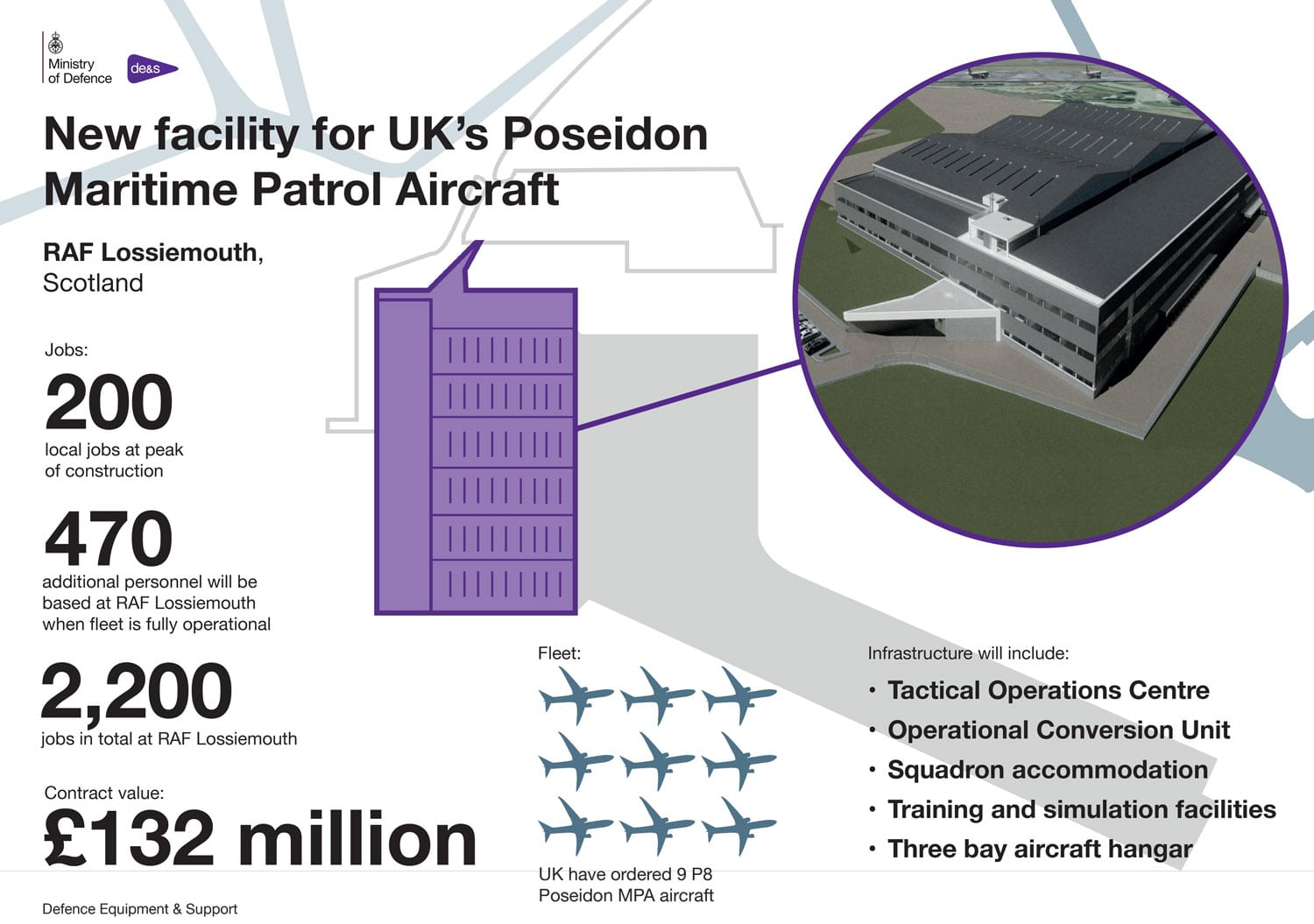