“I’m very proud to have got to where I have in the organisation, especially as I started out as an apprentice and, in that regard, I think I’ve exceeded my ambitions.“ 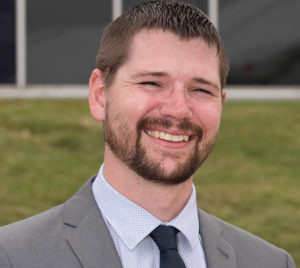 Richard started out a DE&S as an apprentice, he is now celebrating his 12th year with us.

How long have you worked for DE&S?

Approximately 13 of my 16 years in the MOD have been in DE&S, having also worked in Navy Command and the Defence Communication Services Agency (now ISS)

Why did you choose to pursue a career in DE&S?

When I joined one of DE&S’s forerunners – the Defence Logistics Organisation (DLO) back in 2001 – as an engineering apprentice, the work was much more interesting than the commercial apprenticeships I had considered.

I was exposed to a range of weapons systems, including Spearfish, Brimstone and Storm Shadow, and the quality of the training scheme was much better than those offered elsewhere. Since then, the majority of the Ministry of Defence (MOD) posts I’ve been interested in have been within DE&S.

What does you a role in the National Codification Bureau entail?

On a day-to-day basis, I lead a team of specialists who ensure that the North Atlantic Treaty Organisation (NATO) Codification is carried out for MOD equipment. We ensure it is compliant with the standards set out by NATO (NATO Codification is the cataloguing of items that go through the Military Supply Chain).

In addition, I’ve also embarked the department on a Business Development Programme – implementing innovative options to improve our service in terms of visibility, performance, workforce planning, sustainability and customer focus.

On a personal basis, I represent the UK at NATO committees as the UK’s Codification Director – both at the Director’s Main Group and the Strategic Planning Committee, which is a tremendous opportunity to influence NATO policy, but also to work closely with allies to peer review our organisations and performance levels.

What are the opportunities to develop and progress within the National Codification Bureau?

Within the engineering function, I have joined the Institute of Engineering and Technology and my objective is to obtain Chartered Engineer status. Clearly every function has it’s own unique programmes, so some of my integrated logistics people can go for MCILT professional registration, for example.

I was also accepted on to the Government’s ‘Future Leader’s Scheme’ (FLS) which is a talent scheme for the top 1% of grade 6 staff across the civil service, and is designed to prepare us for roles in the Senior Civil Service (SCS) within the next 18 months. There are also a few DE&S specific development schemes that have been established this year to best manage our talent.

I’m very proud to have got to where I have in the organisation, especially as I started out as an apprentice and, in that regard, I think I’ve exceeded my ambitions. I plan to stay in DE&S for a long time to come.

Why would you recommend DE&S to others as a great place to work?

I’ve been asked a number of times by candidates at interviews lately why I would encourage them to work for DE&S. The organisation is becoming better placed to reward, recognise and retain talent compared to our colleagues elsewhere in Defence. Compared with industry, my view is that the work is much more interesting – especially when you can be the decider, not the provider.

What are the social benefits of working for DE&S?

Being based in Kentigern House in Glasgow city centre, we are fortunate enough to have the use of a well-stocked Gym for CSSC members and walking clubs for those that enjoy hillwalking. Being in the city centre also means we are well placed for access to transport links, as well as amenities, bars and restaurants.